Tonight on Antiques Roadshow I watched the first of three episodes from Jacksonville, Florida.  One of the items appraised was a bound collection of original copies of a newspaper running from 1861–1865.  The Family Friend was published in Monticello, Florida.  The appraiser, Ken Gloss, explained that this is a particularly rare find because it was a Confederate newspaper.  As the war went on the Confederacy ran out of supplies for everything and publishing a newspaper probably was not a high priority, so it's pretty impressive that this one had issues in 1865.  There were even two copies of the issue reporting on Abraham Lincoln's assassination, though it appeared almost two weeks after the fact, because news traveled slowly in those days.

The Family Friend appears in the newspaper directory that is part of the Library of Congress Chronicling America Web site.  While the site is known primarily for its collection of online digitized newspapers, it also includes the directory, a listing of newspapers that were published in the United States, not only those that have been digitized.  The only known issues listed in the directory are from February 22, 1859 to December 24, 1861 at the University of Florida in Gainesville and one issue, January 16, 1864, at the American Antiquarian Society in Worcester, Massachusetts.  The Florida Digital Newspaper Library at the University of Florida has 140 issues of The Family Friend digitized, apparently the issues listed in the Chronicling America directory.  The copies the guest on Antiques Roadshow owns may be the only ones still in existence for the later dates.  I checked the lists of newspapers on NewspaperArchive.com, GenealogyBank.com, and Newspapers.com, and it does not appear on any of them. 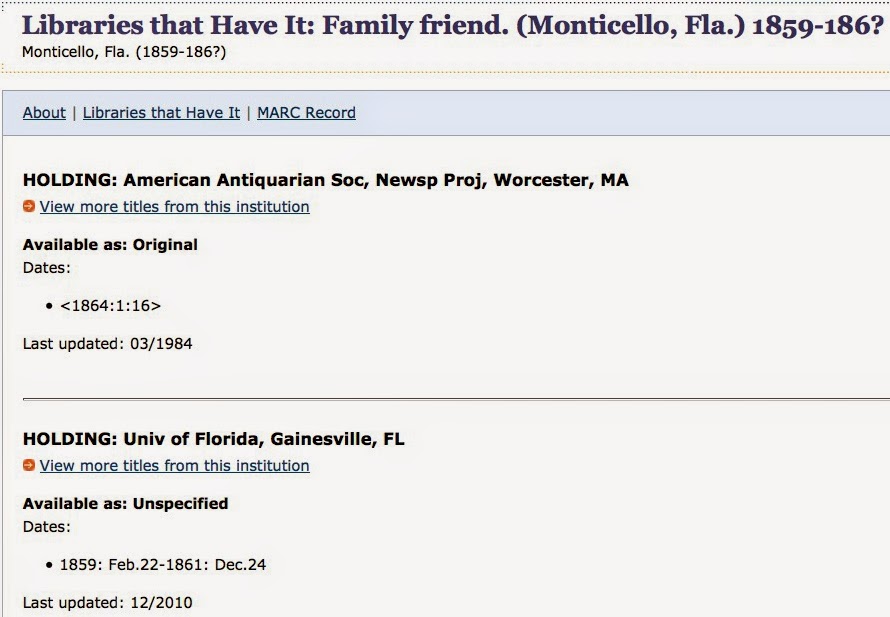 So my question is, who knows this man, and how do we convince him that the newspapers need to go somewhere where everyone can read them — such as being digitized and placed online?  Assuming that he still has the book, of course.  I hope he didn't simply place them in an auction to be sold to the highest bidder, then to be hidden away in someone's personal library.  I know the filming was done during the summer of 2013, so he's had a year — what has happened with those newspapers?
Posted by Janice M. Sellers at 11:06 PM