Cornelius Godshalk Sellers, my great-great-grandfather, was born January 15, 1845, in Doylestown, Buck County, Pennsylvania.  His family was enumerated in Pennsylvania in the 1850 census, but by the time of the 1860 census they had moved to Belvidere, Warren County, New Jersey.  When the call came for volunteers to help fight for the United States in the Civil War, he wanted to enlist.  Because he was underage, his father, Franklin Peter Sellers, had to sign to give his permission, which he did on August 7, 1862. 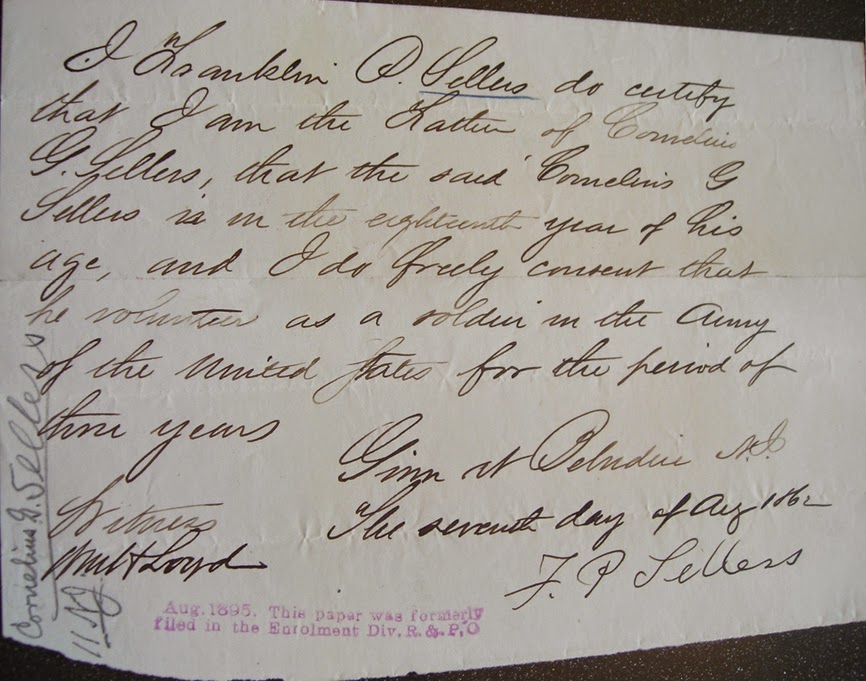 Cornelius enlisted in the 11th New Jersey Infantry, Company I.  He mustered in on August 8 in Trenton, New Jersey, where he was paid a bounty of $25. 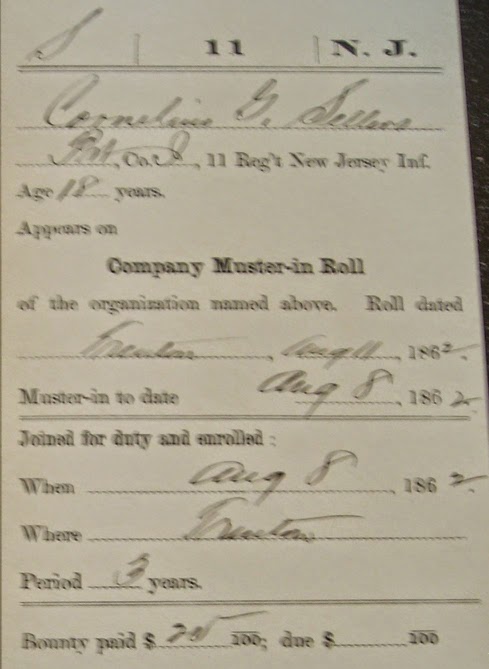 The 11th New Jersey saw action at some important battles of the war, along with several lesser-known battles:
Cornelius was admitted to the hospital at Farfax Seminary in Virginia on June 14, 1863.  There he was treated for anemia.  He was returned to duty on July 2, 1863, just in time for the Battle of Gettysburg.

Cornelius was admitted to the hospital again on March 24, 1864, this time in Alexandria, Virginia.  The stated ailment was epilepsy. 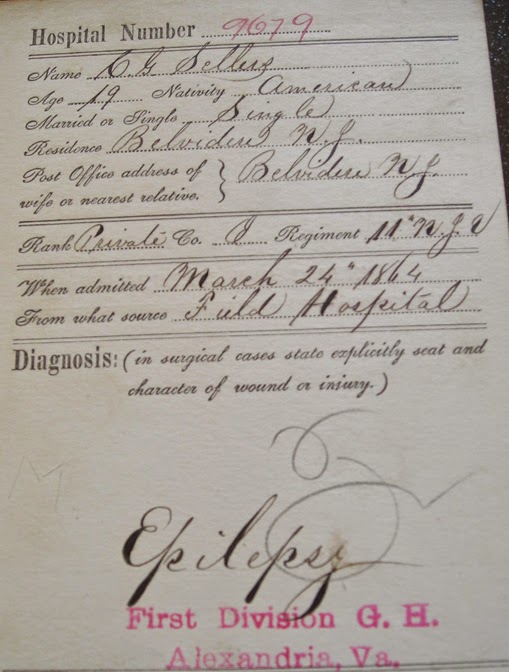 This time, however, he apparently was not truly ill.  The treatment portion of the file states, "Claims to have had frequent convulsions before admission, but has had none here — Evidently shamming."  It's possible he was simply tired of fighting.  He was returned to duty April 20, 1864, having missed no fights involving his unit. 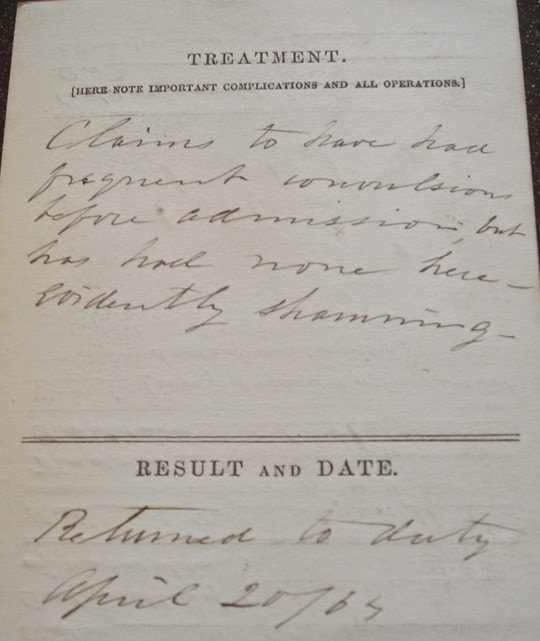 Even with that little incident, he managed to be promoted to corporal on February 23, 1865, having remained a private throughout the previous two and a half years. 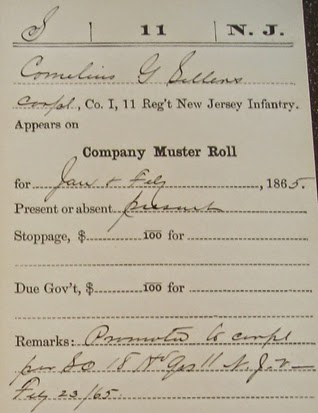 The Civil War officially ended on April 9, 1865, with the surrender of Robert E. Lee at Appomattox Court House.  Cornelius' unit was mustered out a month later, on June 6, 1865, near Washington, D.C.  He owed the government $5.45 on his clothing account, but he was due a $75 bounty, possibly for fulfilling his enlistment.  The muster card indicates he was wounded at Fort Morton, Virginia, on October 6, 1864, which does not correlate with the battles I know of.  Apparently he did not age during his almost three years in the army, as the card also says he was 18 years old, the same age as listed on his muster-in. 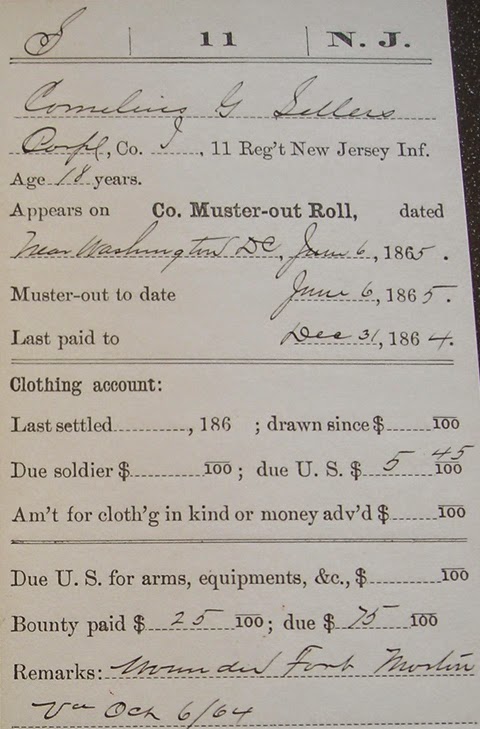 Soon after his mustering out he went to Philadelphia, where he set up shop as a printer by 1865, following the same trade as his father.  He married Catherine Fox Owen, my great-great-grandmother, in January 1870.  They had at least two children — Cornelius Elmer Sellers (who went by Elmer), born November 7, 1874, and Sarah Owen Sellers, born July 26, 1878.

Cornelius was still working as a printer when he died, on December 15, 1877, of acute bronchitis.  He was only thirty-two years old.  He was buried in Odd Fellows Cemetery three days later, on December 18. 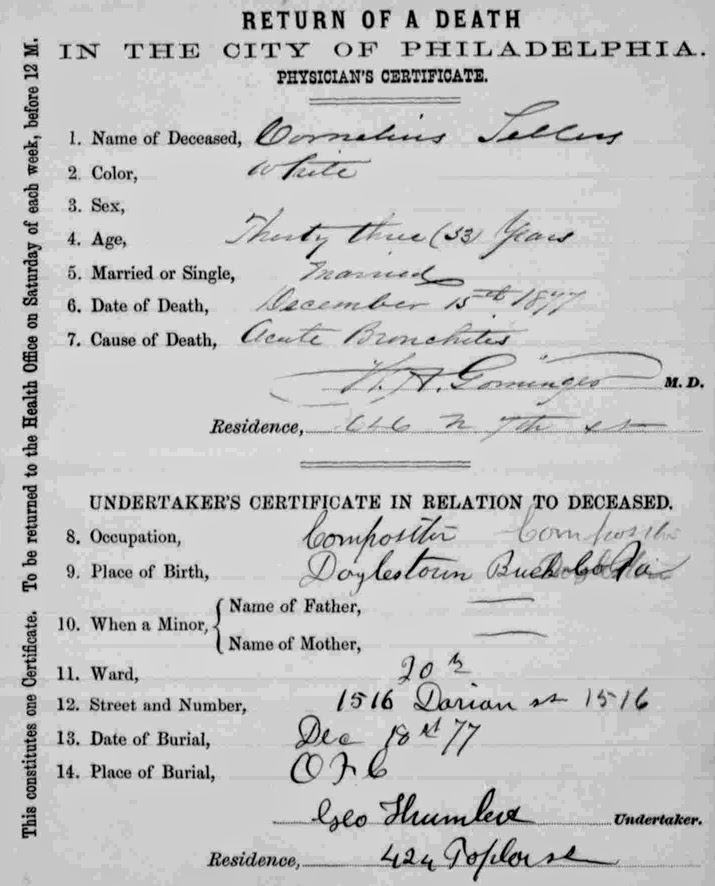 I have just barely scratched the surface of researching Cornelius during the Civil War.  I want to get copies of the morning reports for the unit, which will list his name on the roll and might have more information about the injury at Fort Morton.  I have not yet had the opportunity to check for more hospital records.  I have ordered but not yet received a copy of his payment voucher from June 19, 1865, for $21.46 — and then I will have a copy of his signature.  I don't even know if he had a tombstone or if it survived the destruction of the cemetery.  And I would dearly love to find a photograph of him, whether in uniform or civilian clothes.  But research is always ongoing, and I am happy I can honor Cornelius on Veterans Day this year.
Posted by Janice M. Sellers at 2:17 AM