A few weeks ago, for Saturday Night Genealogy Fun, Randy Seaver asked readers of his blog to create custom maps of U.S. states and Canadian provinces they had visited, and then to create maps of where their ancestors had lived in some given year.  This was a fun exercise, and it was interesting to see the results.  I was disappointed, however, that I was unable to map several of my ancestors, because they were not living in North America.

Surprisingly, Facebook came to my rescue.  One of my friends posted a link to MapLoco, a site that creates custom world maps of places you've visited.  They're not as detailed as the maps from the first site — you can only indicate visited or not, as opposed to the four levels of visits available on the other site.  The world map site also doesn't have an option to export a graphic file of your map.  Instead, you can generate a URL to a page that shows the countries you marked.  But the site does give me a quick, easy way to map the rest of my ancestors' locations!

For the SNGF exercise I used the locations of my ancestors in 1865, which I had generated the week before, and mapped those in the U.S.  For this new map I took those same locations, added the European ones (the only other continent where I had ancestors in 1865), and clicked those places on the world map site.  The site then automatically generated a URL for my custom map.  Instead of using the URL itself, you can do a screen capture of the map and use the image.  The map the site shows when you use the URL looks like this: 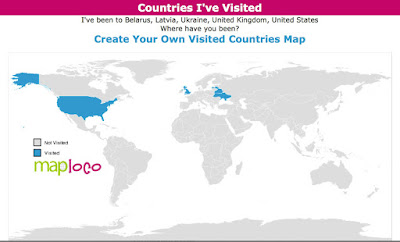 You can see that the title is "Countries I've Visited", and underneath that it lists the countries "I've been to."  There's no way to change the title, which for this map should be "Countries Where My Ancestors Lived in 1865."  The legend on the left indicates Not Visited and Visited.  If you're doing a screen capture, you could easily cut out the "Countries I've Visited" banner, but the text below that is helpful because it lists the countries, which might be difficult to recognize from the map alone.

You actually have two options for images, though.  While you're making the map, it looks like this: 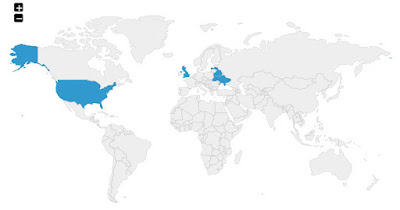 The advantage here is that the Not Visited/Visited legend and "I" text aren't part of the map.  On the other hand, you don't get the list of countries spelled out.

Something I noticed when mapping my ancestors was that due to border changes, I had to fudge a little.  Many of my ancestors lived in the Russian Empire, but that no longer exists.  So I marked the modern countries (Belarus, Latvia, and Ukraine) that control the specific areas where they were.

You might think of that as being a problem relevant mostly to 19th- and early 20th-century research, but I even had the same situation when I created a map of the countries I have visited myself: 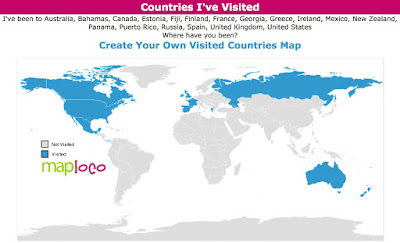 Quite a few border changes have occurred during the latter part of the 20th century.  Two of the countries I have visited are the USSR and the Panama Canal Zone.  Neither one exists today.  For the USSR I marked the countries corresponding to the Soviet republics I visited.  But the Canal Zone is just gone, incorporated into the country of Panama, which I visited separately from the Canal Zone.

Hey, wouldn't it be cool if there were a site that could generate maps for any given year, with the appropriate corresponding country borders?
Posted by Janice M. Sellers at 9:37 PM