Skeletons in the Closet: Family "Ogres" 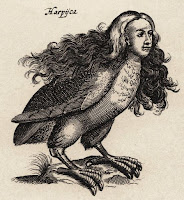 This is one in an occasional series of posts about less-than-pleasant subjects which may arise during your family history research, or which may be glossed over entirely by some relatives.  A page listing previous posts in the series can be found here.

It would not be logical to believe that all of our ancestors and relatives were equally liked within the family.  But what do you do when you learn that there's someone who was just a nasty person?

Along with the many happy stories that my grandmother told me about the family while I was growing up, there were also some that were not so happy.  Some I always remembered were about one of my grandfather's sisters.  To hear the stories the way my grandmother told them, she seemed like an ogre right out a fairy tale.  One of her grandchldren happened to be adopted; she always said that he wasn't really her grandchild and treated him more shabbily than her other grandchildren.  When her daughter was ill with cancer and near the end of her life, she ordered her daughter around like a servant and had her make dinner for her.  Overall, she didn't sound like a very nice person, but I took it with a grain of salt, because I thought the stories might have been exaggerated.

Once while traveling I had an opportunity to meet the adopted grandchild.  I was thrilled to do so, because he had been my mother's favorite cousin growing up, and she had always had good things to say about him.  When I did meet him, he at first was hesitant and pointed out that he was "only" adopted.  I convinced him that I felt he was just as much a part of my family as everyone else and I was happy to know him.  He eventually confirmed the story about his grandmother treating him as second-rate.  So much for exaggeration in that instance.

Later I was able to meet her son.  While he did not specifically confirm the stories I had previously heard, he also didn't have anything positive to say about her.  He pretty much agreed that she had been unpleasant most of the time.

Eventually I decided to try to find out the truth of the last story my grandmother had told me.  Apparently my great-grandfather had also not been fond of this particular daughter.  I had been told (more than once) that in his will he left her $1, to make sure she couldn't argue that he had "accidentally" forgotten her, and left everything else to the other siblings.  I put off ordering his probate file for a while, because it was a significant cost ($70, and that was about fifteen years ago!), but I finally sent the money.  I discovered that my grandmother had exaggerated — but only a little.  The will had bequests to five of the six children of a thousand dollars or more for each, but only $100 to this daughter.  Then came bequests to many charitable institutions, an amount for a new tombstone for his father's grave, and the like.  After all of these he stated that the remainder of his estate should be divided equally between all of his children — except for her.

Now that I had seemingly confirmed all the negative information I had been told, I had to decide what to do with it.  I certainly wasn't going to excise the woman out of the family tree; that would essentially be lying, not only because she existed in the first place, but because she had been married, had children and grandchildren.  She was part of the family.

On the other hand, I realized I didn't have to trumpet what I did know.  I haven't buried it, but I have documented and saved it.  It did show that, once again, genealogy isn't simply finding out names and dates, but learning about who you come from, good or bad.  It's discovering the people behind the curtain of your life.

When you find out there's an ogre in the family tree, acknowledge her for who she is, warts and all, including trying to understand her circumstances and her past as much as possible.  If you have the opportunity (I didn't), you can try to find out why she was like that and maybe (maybe!) end up with some empathy for her.  Then celebrate who you are and be glad you don't have that person living with you now!
Posted by Janice M. Sellers at 11:07 AM

Email ThisBlogThis!Share to TwitterShare to FacebookShare to Pinterest
Labels: adoption, ogres, probate, skeletons in the closet