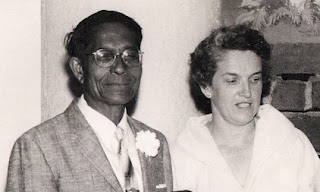 On one hand there was an Irish Catholic girl from Brockton, Massachusetts, near Boston.  She became a nun in a nursing order.  She served at a hospital in Kentucky, then left the order and worked as a nurse in Baton Rouge and San Antonio, finally going to Santa Monica, California, where two of her aunts lived.

On the other hand there was a young Sikh man from Khatkar Kalan, in Punjab, India.  He came to the United States to go to college.  Whether or not he did so remains unverified, but he stayed in the Southern California area, where his uncle lived, also ending up in Santa Monica.

The young Sikh fell in love with the beautiful redhead he passed almost daily on his way to work.  At some point he stopped and talked with her.  Things went on from there as these things do, and the young man converted to Catholicism to marry his love in 1948.

Though I'm sure there were many in Santa Monica who commented on the marriage, this couple was lucky to live in California, where they were allowed to marry.  If they had been living in the South, the young man's dark skin would probably have prevented their marriage.  Almost twenty years after they married, the Supreme Court struck down laws preventing interracial marriage in the case of Loving v. Virginia (1967).  And now every year on June 12, we celebrate Loving Day and the right of a man and woman to marry whom they choose.  And soon, perhaps, we will celebrate another victory for more loving couples.
Posted by Janice M. Sellers at 8:18 PM