History of the Necrópolis Cristóbal Colón 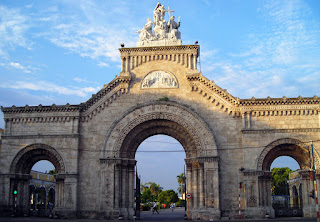 During my recent trip to Cuba, I visited the large Necrópolis Cristóbal Colón (Christopher Columbus Cemetery).  Just inside the entrance was a display celebrating the 143rd anniversary of the cemetery, which opened October 30, 1871 (so the display probably was put up last year).  I figured this information would be difficult to find outside of Cuba, so I've translated the text to share it with others.  I have arranged the short essays into a rough chronological order of the events described, which is different from the order in which they were displayed.  Please forgive the light reflections on some of the images; the display was all under glass, and I'm not a professional photographer.

Illustrated Timeline of the Christopher Columbus Cemetery
143rd Anniversary of the Cemetery: October 30, 1871 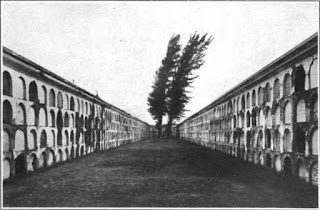 In 1806 Havana’s first general cemetery, known as the Espada Cemetery in honor of Bishop Juan José Diaz de Espada Fernández y Landa, one of its primary supporters, opened its doors. This cemetery ended the dangerous practice of burials in churches and convents.

In the mid-19th century, gradual population growth and deteriorating hygiene and sanitation led to successive epidemics, exhausting the burial space available and making it necessary to build a much larger and more modern cemetery.

Opening of the Christopher Columbus Cemetery 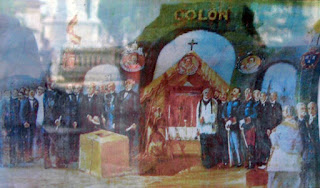 On October 30, 1871, the new city cemetery was opened.  The event was recorded in an anonymous painting portraying what happened at the ceremony, with the benediction, and which included depositing into the first stone a copy of the day's newspaper and some coins.

North Facade of the Cemetery 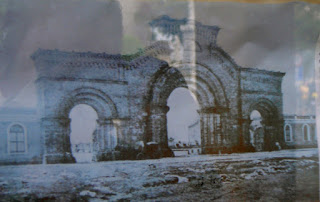 Majestic sculpture designed by the architects Calixto de Loira and Eugenio Rayneri. Almost 22 meters high and built of stone from Jaimanitas [a suburb of Havana].  It is inspired by the classic Roman "Gates of Triumph", showing a predominance of the popular Romanesque style in its arches and the massiveness of its walls.  Note that the sculptures were not yet placed.

First large mortuary that was built in the cemetery for the burial of the dead, using a system of recesses; these functions ceased in 1874 due to defects in the construction.  In the 1970’s it was reclaimed to be used as a state-owned ossuary.  It is an extensive catacomb, 95 meters long, with 526 recesses in three rows.

The name of the gallery was taken from a biblical character of the Naphtali tribe who was devoted to various works of charity, including transporting and burying the dead, in the 7th century BC [8th century BC, according to the Wikipedia article]. 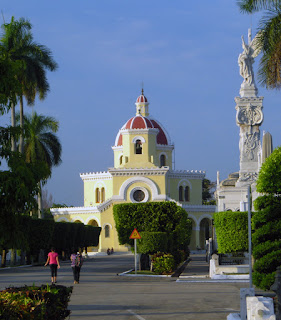 In 1886 work was completed on the new cemetery.  In the chapel Christian ceremonies are conducted.  This chapel marks the center of the cemetery, at the junction of the main avenues.  Of a marked necromantic character, it is the only religious building in Cuba with an octagonal plan.

View of the Interior of the Cemetery, 1892 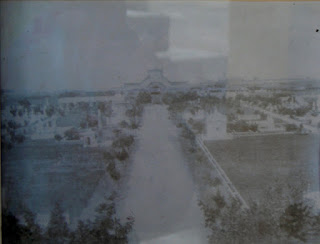 View from the central chapel of the cemetery toward the main entrance.  This represents the upper-class area, where one sees an abundance of elegant monuments.  Note how the cemetery was growing like a city, in line with the interests of the owners.  The hierarchy of the spaces was determined in the sales of the plots in order to build tombs according to prices established for social classes. 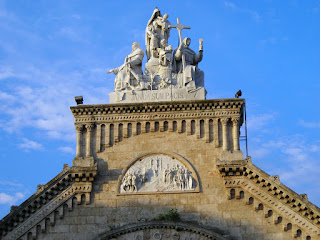 Crowning the main arch, above the inscription JANUA SUM PACIS (“I am the Gate of Peace”), stands a sculpture in Carrara marble, representing the three theological virtues (Faith, Hope, and Charity), by Cuban sculptor José Villalta y Saavedra.  It was put in place in 1904.

At the same time two other works by the same sculptor were placed on the north and south faces of the main arch. They represent two biblical passages. On the outside is "The Crucifixion" [visible in this photo], and inside is "The Resurrection of Lazarus." 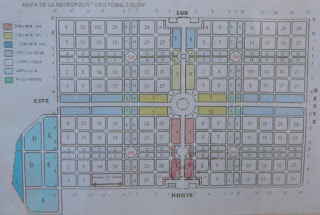 In 1922, a project was drawn up to expand the cemetery through its eastern section, incorporating areas that are called A, B, C, D, E, and F, raising the overall area to 560,000 square meters [almost 140 acres]. 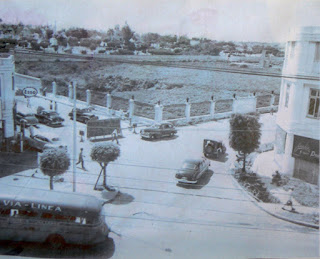 View from the corner of Avenues 23 and 18.  Here the intersection of Zapata Avenue and the old Estancias Road can be seen.  Note that the right angle of the corner was transformed into a curve to provide greater traffic flow for the road.  [And see the Esso gas station?]

The last two blocks of the cemetery to the west were a space for burial of non-Catholics and victims of epidemics.  After the construction of the Chinese and Baptist cemeteries, as well as improvements in hygiene and sanitation, the space had no purpose and was transformed in the late 1940’s.

In 1987 the cemetery was declared a national monument, due to its indisputable historical value, heritage, and treasured documents in its archives.  In the cemetery expressions of religion and of Cuban popular and traditional culture coexist.  It has an extensive collection of architectural and sculptural works and decorative arts, true examples of national and universal culture.  Inside one can find prominent individuals of national and international importance.
Posted by Janice M. Sellers at 2:55 AM