This week, for Saturday Night Genealogy Fun, Randy Seaver suggested that people look for their blogs on the Wayback Machine, something I had never thought of doing:

1)  Do you have a Web site or a blog?  Or know someone with one?  Pick yours, theirs, or another.

2)  Now go to the Wayback Machine (https://web.archive.org/web/) and put the Web site address in the search field.  Explore — see what the Web site looked like over time — start with the first available archived date and select others over the lifetime of the Web site.  Make some screen shots to show your readers.

The Wayback Machine has seventeen captures of my Ancestral Discoveries blog.  The first is from August 11, 2011, seven months after I started it: 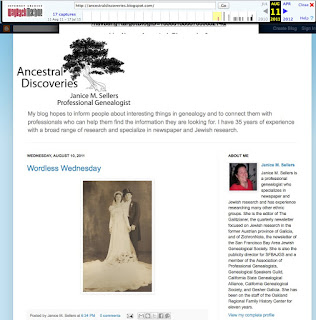 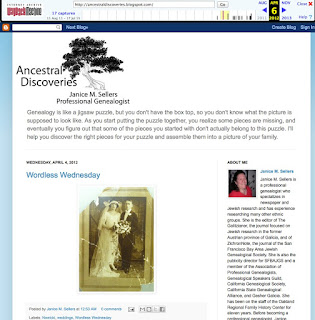 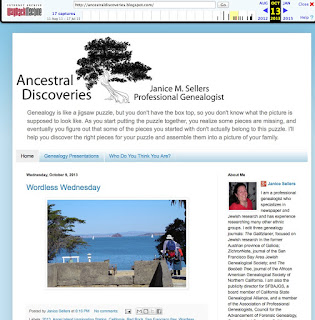 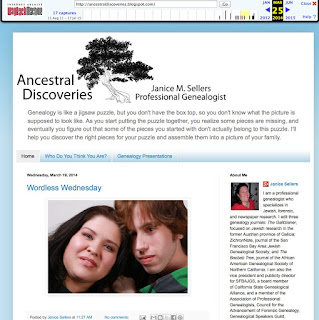 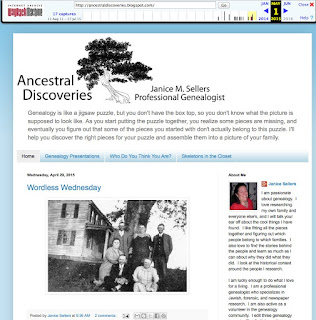 Like Randy, I am also somewhat a creature of habit, in that I haven't changed my layout or theme since the beginning.  I changed the blog description sometime between August 2011 and April 2012, and since then it has stayed the same.  The biggest difference has been the "About Me" write-up, which seems to be different on every capture.

I was surprised to see that ten of the Wayback captures showed a "Wordless Wednesday" post on top, even when the captures were on other days of the week.  Maybe the spiders like photographs?
Posted by Janice M. Sellers at 2:55 AM