This week for Saturday Night Genealogy Fun Randy Seaver asked about our most well traveled ancestors:

My immigrant ancestors came from either western Europe (including the British Isles) or eastern Europe, so whichever ancestor traveled the furthest had to be one from eastern Europe.  After looking at distances for Krustpils, Latvia; Porazava, Belarus; Kamyanyets Litovsk, Belarus; and Chisinau, Moldova from Ellis Island, the winner is Kamyanets Podilskyy, Ukraine.  (I used Google to determine all my distances.)

I know my great-great-grandfather Avigdor Gorodetsky (later Victor Gordon) was in Kamenets Podolsky.  I have a photograph of him taken there.

From Kishinev, he traveled to to Rotterdam, The Netherlands, to take a ship to the Goldene Medina, the United States, 1,374 miles.

The ship's journey from Rotterdam to Ellis Island was 3,637 miles.

After arriving at Ellis Island, Victor lived in Brooklyn, a mere 12 miles further, until his death.

Adding all of that up brings a total of 5,247 miles that my great-great-grandfather traveled from the first place I know he was to where he died.

My great-grandfather Joyne Gorodetsky (Joe Gordon) followed the same path to the United States, including departing Europe from Rotterdam, so his total was also 5,247 miles.

There is a possibility that Avigdor began his life in Orinin, Russia (now Orynyn, Ukraine).  Every Kishinev record I have found that mentions him indicates he was "from" Orinin.  That means his family was registered there officially, but not necessarily that he actually lived there.  If he did, I can add 10 more miles to his travels, the distance between Orinin and Kamenets Podolsky.

A very well traveled person in my database is my cousin's mother.  Just the basic information I know is that she was born in Fremantle, Western Australia; immigrated to the U.S. at some point and married in Reno, Nevada; moved to Key West, Florida, where she had two children; came back west to San Jose, California, where she had another child; and died in Redding, California.  That comes to 15,230 miles, almost three times as far as my great-grandfather traveled.

I worked out my rough mileage also.  I was born in Los Angeles, California, and moved with my family to Sydney, New South Wales, Australia.  When we returned to the U.S. we went to Niceville, Florida.  I moved back to Los Angeles to go to college and then moved to Oakland, where I now live.  The total for that is 20,434 miles but covers only the places I've lived, not my other travels.

My mother beat me by a few thousand.  She was born in Brooklyn, New York; moved to Miami, Florida; married and crossed the country to Los Angeles; moved to Australia and then to Niceville; and then moved to San Antonio, Texas and back to Florida.  That leaves out a few minor regional moves and still comes to 23,484 miles.  Her nickname of "the wandering Jew" was well earned.

I think my father is the champ, however.  He was born in Englewood Cliffs, New Jersey.  I know I've forgotten a few moves to New York and back to Jersey, but at some point the family moved to Mount Holly, New Jersey.  From there my father and his mother moved to Sanford, Florida (where he graduated high school) and then on to Miami.  Following that came the cross-country trek to Los Angeles, moving to Australia, and returning to the U.S.  From Florida he and his third wife moved to Ohio (Cleveland, I think), then San Antonio, and then back to the Niceville area.  I'm missing several regional moves, and his total is still 25,161. 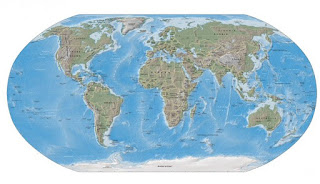 I feel tired just adding it all up.

Randy Seaver used this theme again for Saturday Night Genealogy Fun on September 18, 2021.  I found the list my grandfather created of everywhere he had lived and added the miles for the years my father lived with him to my father's tavels, so he now totals 26,184 (25,161 + 1,023) and is definitely still in the lead in my family for most traveled.  I'm still not accounting for short local moves.  (Maybe I'll add them if Randy uses this theme a third time.)  Those additional locations were: