Saturday Night Genealogy Fun: How Did Your Parents Meet?

Maybe Randy Seaver can read minds, because I was thinking about this very question recently.  In this week's installment of Saturday Night Genealogy Fun, Randy asked readers to post about how their parents met:

1) Do you know how, when, and where your parents met?

NOTE:  You can substitute your own story about meeting your spouse, or the story about your grandparents, etc.

I did not find out how my parents met until several years after my mother had passed away.  My grandmother was in California for a visit, and we were driving to meet up with other family members.  I don't remember if I asked her or if she just started talking about it, but she told me that while the family was living in Miami, my mother and her best friend were going out to a party, and the car broke down.  My mother was worried about how they would get to the party, but her friend said, "Don't worry, my uncle is a mechanic!"  Since this was well before the age of cell phones, I don't now how they contacted him (maybe there was a pay phone nearby?), but that mechanic was my father.  In October 1961 my parents were married.

I still have a lot of details to fill in.  I don't know how long before they married that the "great car breakdown" occurred.  I know my mother's family moved to Miami sometime between 1949 and 1951.  My father and his mother were living in Sanford (near Orlando) until at least about 1953ish, when he graduated high school, but he was living in Miami before December 11, 1956, because that's when and where he married his first wife (they knew each other through roller skating).  But then they moved back to New Jersey (where they were both from originally and where my half-sister was born) for a while, and I don't know when he/they returned to Miami.  (Whoops!  I just realized that makes two more moves for my father that I did not count in his migration total from last week.  Gotta add another 2,400 miles!)  I don't even know when my mother's best friend, my father's niece, moved to Miami.  There is always more to learn! 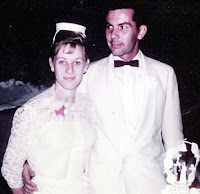