An Administrative Change of Sex

I have tried three times in the past to obtain a copy of my grandfather's birth record by mail.  He had claimed several different years at different times but always used the date of April 6.  He eventually settled on the year of 1903.  The first time I wrote to the New Jersey State Archives in Trenton and requested a search for Bertram Sellers, giving a range of 1903 ± 5 years.  No luck.

The second time I tried "male" Sellers, thinking that maybe the given name had not been formalized yet when the birth was registered, still with the range of 10 years.  "Sorry, no record was found . . . ."

My third attempt was after I had acquired a copy of my great-grandparents' marriage record.  They were married on November 7, 1903.  I thought, Hmm, if he really was born in April 1903, before the marriage, maybe he was registered under his mother's maiden name.  So I sent in a request for Bertram or male Armstrong.  Still nothing!  This was becoming annoying!

I finally decided it was going to require someone going in person to actually browse through the records.  As my sister lives in Pennsylvania, she's the closest relative to Trenton, and she had told me once she would be willing to go look for records to help with the family history research (silly girl!).  So I hit her up, and she agreed to go.  Of course, she keeps a very busy schedule, so it took her a while, but she was finally able to go to Trenton today.  And what did she find?  A record for a female child, *Gertrude* Armstrong, born April 6, 1903, mother's name Laura Armstrong.  No father was listed, merely the socially disapproving abbreviation "OW" (out of wedlock).  With the correct birth date and mother's name, this certainly seemed to be the record we wanted, but Gertrude?  Female?  Was this perhaps a heretofore unknown twin of my grandfather, and his birth was still hiding?

But the lovely people at the archives found a second record.  In 1940, my great-grandmother filed a form to correct or amend a birth certificate.  She said that the child listed as female had actually been male, and instead of Gertrude L. Armstrong, the name really should have been Bertram Lynn Sellers.  Oh, and by the way, since it wasn't on the original record, the father's name was Cornelius Elmer Sellers, and here's the marriage date.  (And I finally understood why the archives had not been able to find the record before.) 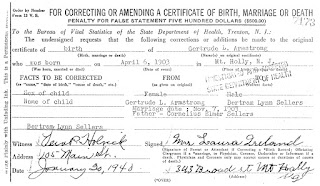