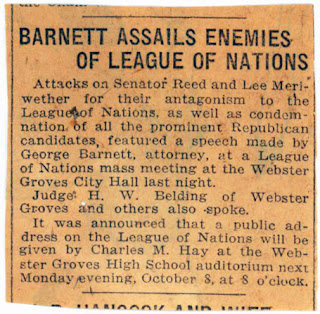 I've run into a problem with posting the remaining documents relating to the dispute between Emma (Schafer) Le Forêt and her Curdt half-siblings.  The documents are oversized, and the large flatbed scanner that I normally use is not working at the moment.  I would prefer to avoid scanning them in pieces and then tiling them, because I'm really not very good at that.  While I wait for repairs, I decided to post this small newspaper clipping.

This is about 2" square.  It appears to be newsprint that has yellowed with age.  There is no indication on either side of which newspaper it came from or when.  It was mingled in with the documents about the property inheritance.  I suspect this was saved by Jean Le Forêt, as he seems to have to followed other international news stories.

I have tried some online searches but have not been able to determine the newspaper source of the item.  My first guess is the St. Louis Post-Dispatch, as other newspaper clippings saved by Jean came from it.  My guess for the year is 1923, as October 8 fell on a Monday that year.  I did find items with similar topics published in St. Louis and area newspapers in 1922.

I didn't recognize the names of the people, so I looked around a little.  "Senator Reed" was James A. Reed, a Democratic Party senator from Missouri from 1911–1929.  In addition to opposing the League of Nations, which was counter to the prevailing attitude of the Democratic Party at the time, he was against immigration of anyone who was not white into the United States, and he opposed reauthorization of an act designed to reduce infant and maternal mortality.  He got his mistress pregnant but wouldn't divorce his wife to marry her, instead waiting until his wife died and then marrying the mistress (even though his first wife had divorced her husband to marry him).  Sounds like a charming fellow.

Lee Meriwether was an author and worked for the government at times.  He wrote a biography about James Reed, who was a friend of his.

George Barnett's name appears many times in the Post-DIspatch.  He was an attorney in the St. Louis area and lived in Webster Groves at some point.

H. W. Belding lived in Webster Groves.  Along with being a judge, he was a member of the Board of Managers for the Federal Soldiers' Home.  One newspaper item called him a police judge.

Charles M. Hay was another lawyer in the St. Louis area.  The State Historical Society of Missouri holds a collection of his papers.

Webster Groves is described on Wikipedia as "an inner-ring suburb of St. Louis in St. Louis County, Missouri."  It is about 5 miles from Clayton, and 9 miles each from Overland and Creve Coeur, placing it squarely in the area in which Jean and Emma were living.  Maybe Jean attended the discussion himself.
Posted by Janice M. Sellers at 11:30 PM