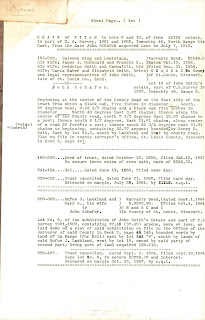 This sheet of paper is 8 1/2" x 13".  It's a piece of off-white 20# bond with a watermark of BERKSHIRE / SOUVENIR BOND / USA.  It has a small rectangular piece of paper, on which is written "Original" in pencil, folded over the upper left corner.  This page is followed by eleven others on the same type of paper.  They are backed by a rectangular piece of an advertising poster, which appears to have been cut down to size for the purpose of backing these pages. 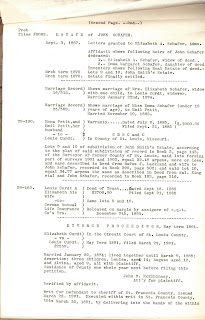 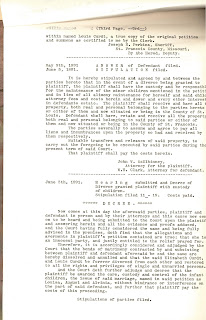 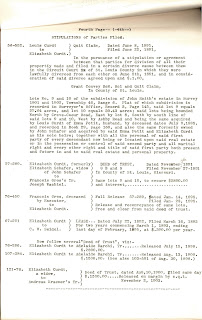 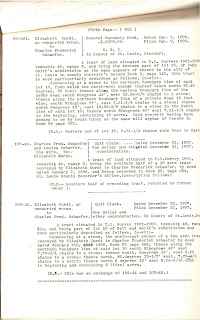 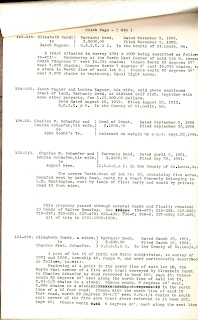 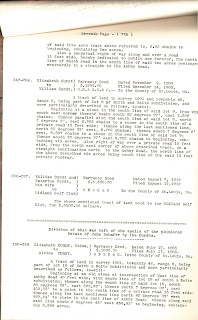 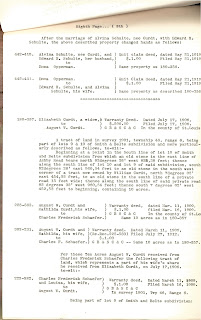 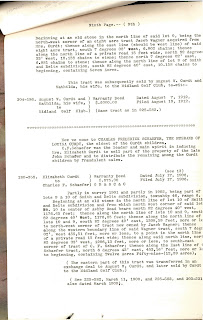 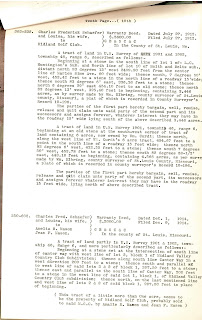 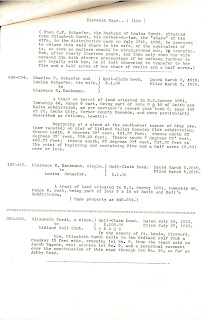 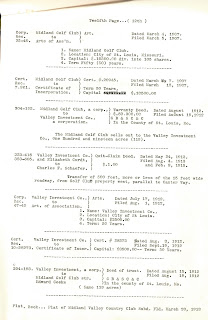 Jean La Forêt was definitely willing to spend time on research.  It must have taken many hours to find all the records he cites in this document and then type up the summaries.  He researched the property that John Schafer, Emma (Schafer) La Forêt's father, bought in 1856 from that purchase through to 1919, the year Emma's mother died.  He even included transcriptions from Louis and Elizabeth Curdt's divorce case.  Here's a quick overview of the contents:

1864:  A warranty deed was executed for lot 9.  The property was released on margin October 19, 1867, six weeks after letters of administration were granted to Elizabeth Schafer to handle her deceased husband's estate.

1885:  Louis and Elizabeth Curdt filed a deed of trust on the land with a life insurance company.

1891:  Elizabeth Curdt divorced Louis Curdt on grounds of desertion.  She was awarded custoy of Louisa, August, and Alvina and ownership of lots 9 and 10 but received no alimony.

1892:  Elizabeth Curdt leased some part of the land for two years to C. W. Seidel.

1897:  Charles and Louisa Schaefer filed a quit claim to Elizabeth Curdt for half of the property deeded in 1896.  The amount is $1 and "other consideration."

1897:  Elizabeth Curdt filed a quit claim to Charles and Louisa Schaefer, also for $1 and other consideration, to exchange property.

I can see from this how one could interpret the sales and resales as ripping off Elizabeth Curdt.  Playing devil's advocate, however, it could be that the land had simply appreciated quite a bit due to development in the interim between Elizabeth selling the lots and the children reselling them.  It also could be the case that Elizabeth was being generous with her children.  It's obvious from previous documents that Jean and Emma believed she was being taken advantage of.  I don't think I see enough evidence here of that, though.
Posted by Janice M. Sellers at 11:21 PM