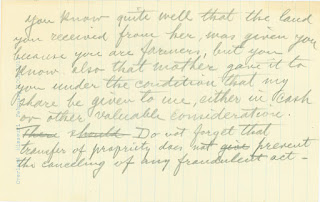 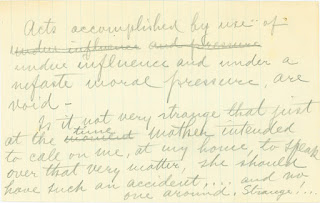 This piece of lined paper is 5" x 8".  It has no watermark and is of moderate to poor quality.  It is similar to the page with notes about land that each of Emma La Forêt's siblings had but is definitely of different stock.  This sheet has a larger blank margin at the top of the page, and it lacks the textured lines of the earlier one.  It does have a lengthwise fold in about the same position as the first paper, which could mean that they were in an envelope together at some point.  This sheet has two holes in the upper left (first side)/upper right (second side) that suggest it had a straight pin in it.  The holes are fairly easy to see on the second side.

Everything on both sides of the sheet is handwritten in pencil except for a small typed line on the first side.  It is oriented parallel to the lines on the page.  The writing is probably that of Jean or Emma La Forêt.  (I'm leaning toward Jean due to the awkward English.)  Here is a transcription of both sides.

You know quite well that the land
you received from her, was given you
because you are farmers, but you
know also that mother gave it to
you under the condition that my
share be given to me, either in cash
or other valuable consideration.
There should Do not forget that
transfer of propriety does not give prevent
the canceling of any fraudulent act –

Acts accomplished by use of
undue influence and pressure
undue influence and under a
nefaste moral pressure, are
void –
Is it not very strange that just
at the moment time Mother intended
to call on me, at my house, to speak
over that very matter, she should
have such an accident, . . . and no
one around.  Strange! . . .

The date is before one topic discussed in the handwritten portion occurred.  Elizabeth Curdt died April 25, 1919, two and a half months after the February date.  The place in which the date is typed and its orientation to the rest of the page suggest that perhaps someone was going to type a note on February 10.  Why that person did not do so, we are unlikely to learn.  The date does not appear to be connected to the note itself.  It looks as though someone who was frugal simply used the piece of paper and ignored the typing.

The note itself has some content similar to that of the letter that Emma wrote to her three Curdt half-siblings:  the discussion of "Mother" (Elizabeth Curdt) having intended that Emma receive her "share."  It has more in common, however, with the handwritten narrative of Emma's life that I posted at the beginning of my journey into this story:  "fraudulent" act, "nefaste moral pressure", and the phrasing used when writing about Elizabeth's death.

I'm pretty sure that "property" was meant where the word "propriety" appears.  Unfortunately, swapping that word in doesn't cause the sentence to make much more sense to me.  I could see that transfer of property would not prevent the accusation of a fraudulent act, but the cancellation of one?

I wish more of these items had dates on them (well, dates that actually relate to the information).  This sheet might have been a draft for a response to the letter from the Curdt siblings that reused phrases from earlier writing.  According to the typed transcription of that letter, an answer was sent on February 3, 1920.  Why, oh why, is there no copy of it in my piles of paper for this family?
Posted by Janice M. Sellers at 11:06 PM