Genealogy Served on a Silver Platter

Ever wonder what it would feel like to just be handed all the information on your family?  You know, kind of like what happened on episodes of Who Do You Think You Are? and Finding Your Roots:  family trees, death certificates, photographs, military discharge papers, what have you.  But that never really happens, right?

Over the years it has become a running joke between us.  Every so often, a family member contacts her and says, "Oh, I'd like to send you a copy of all the research I've done."  Then she receives another well put together and well documented part of her family tree, often with supporting materials.  She already has several copies of different trees and boxes of original letters and documents from both sides of her family.

She was just given another bonanza. 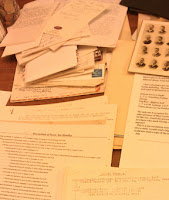 She received two large envelopes full of documents and a USPS Medium Flat Rate box of photo albums and loose photos.  Most of the photos are even labeled!

Among the documents are:
• eight family trees for various lines
• a typed transcript of her great-uncle interviewing her great-grandmother, including the story of how her family was instrumental in the founding of a town in Iowa
• two copies of a treatise on one of her family names
• two copies of a book about the church her ancestor established in the 1600's
• a photo of her grandfather's high school graduating class from 1917
• her grandfather's entire probate file, including correspondence

• an original copy of her grandmother's death certificate from Spain (which probably would have been difficult to replace)
• original U.S. Army discharge papers
• a "whole pile" of family letters
• newspaper clippings
• church bulletins
• visitor books from funeral services

Carol's aunt (her mother's sister) collected all of this information.  She has moved to assisted living, and the aunt's daughter had to clean out the home.  This cousin talked with her brothers and her own children, but no one wanted all of the genealogical stuff.  Rather than just throw everything out, she asked around the family to find someone who did want it (hooray!).  Carol got all of this because, unlike her friend, when these items needed a home, she recognized their value.

Of course, now everything needs to be taken care of -- sorted out, put in archival boxes, separated with nonreactive paper.  And some of this is duplicates of what she already has.  But I know that Carol is up to the task.  Now if she were only more interested in genealogy ....

What was that?  No, of course I'm not jealous.  Whatever made you think so?
Posted by Janice M. Sellers at 3:10 PM