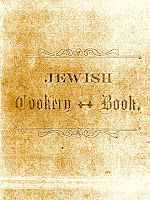 I just learned about a blog called "The Shiksa in the Kitchen", written by a recent (2010) convert to Judaism who has been exploring the world of Jewish cooking, including kashrut (the rules for keeping kosher).  She posted about a copy of an Indian Jewish cookbook published in Calcutta about 1922.  I found a few references to the cookbook online, but it doesn't seem to be available anywhere, and I'm sure it was printed in only small quantities to begin with.  She mentioned it has "several kosher Jewish Indian recipes", but I'm not sure if all of the recipes are kosher.

I love Jewish cooking and Indian cooking and now just have to find a copy of this book!  One year for Passover I even cooked an Indian-themed seder, including mulligatawny-spiced matzoh ball soup and an egg curry.

Recipes and food traditions can sometimes impart information about family history.  This cookbook, for example, probably has recipes that follow Sephardic traditions, because most of the Jewish communities in India had Sephardic roots.  But first I need to find a copy of the cookbook to read the recipes ....
Posted by Janice M. Sellers at 12:58 AM