Colonial Handwriting Was a Big Hit 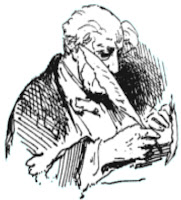 Tuesday I taught a class on American Colonial handwriting for the first time.  I was the third choice to teach, after the woman who has been teaching it for the past few years (who was unable to do so this year) and the person who was going to substitute for her (whose husband decided he wanted to take her away for a week's vacation).  And then the date was switched on me -- originally the class was supposed to be March 26, but it was pushed back to March 19.  So I was more than a little nervous going in, between being third in line, it being a new subject for me, and having a week less to prepare than I had anticipated!  But the class went smoothly, and the attendees seemed happy with the lesson and the handout.  I discussed how several letters were formed differently than what we are accustomed to, spelling inconsistencies, how words and names could be abbreviated, and even the calendar change of 1752.  I showed several real examples from the 1700's and had people read through them; by the end of the class everyone had a pretty good grasp on it and was able to read the examples fairly quickly.  So I was happy and relieved, and now I have another class in my repertoire.

I have two more new talks I am creating this year.  The programming person at the Napa Valley Genealogical Society read about forensic genealogy and learned that I am a member of the Council for the Advancement of Forensic Genealogy (CAFG), so asked if I could speak to the society on the subject.  Forensic genealogical research is when there are "possible legal implications that involve determination of identity, kinship, legal rights, or distribution of held monies or assets" (from the CAFG Web site).  I will make that presentation in Napa on July 18.

In August, I will debut my newest newspaper talk, on finding and using online historical Jewish newspapers, at the International Association of Jewish Genealogical Societies conference in Boston.  The conference runs August 4-9 and is being held at the Boston Park Plaza Hotel & Towers.

Of course, I have additional newspapers talks coming up.  I am the newspaper queen, after all!  On March 29 I'll speak at the Oakland FamilySearch Library on the subscription newspaper databases available there.  On April 25 I'll be in Cincinnati, Ohio, at the Ohio Genealogical Society conference teaching about online historical black newspapers.  And in October, for Family History Month, I'll present my general talk about using online newspapers for genealogical research twice, at the Family History Day at the California State Archives (October 12) and at the Concord FamilySearch Center's Digging for Your Roots one-day conference (October 19).  All of my newspaper classes cover where to find newspaper databases and how to use effective search techniques.

My other presentation that is popular right now is on research techniques for finding women's maiden names.  I talk about a wide range of resources that can be helpful in finding those elusive names.  I'll be giving that talk at the main branch of the Sacramento Public Library on May 5, the Livermore-Amador Genealogical Society on June 11, and the Concord FamilySearch Center's Digging for Your Roots on October 19 (yup, two classes in one day).

Last but certainly not least, Berkeley Midrasha wants me to return this fall to teach my genealogy class to the high school students.  That was a fun and different experience last year, and I'm looking forward to trying to get more kids hooked on genealogy.

I enjoy sharing my enthusiasm for genealogy through my classes.  I would love to have you join me at one or more of my talks this year.
Posted by Janice M. Sellers at 1:29 AM