I Started Learning to Read Hebrew! 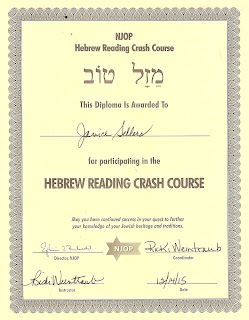 I've been wanting to learn to read Hebrew for many years.  As a Jewish researcher, I've always known it would be a useful skill.  In addition, as an officer of a Jewish genealogical society, though it isn't a requirement, I thought I really should know something about the language.

So I've had it on my (very long) list of things to do for several years, but there were always reasons I didn't manage to do it (like money, time, and all those other things that get in the way of getting things done).  But then I read about a free (!) five-week class at Congregation Beth Israel–Judea in San Francisco.  And I figured out that I could take BART to the synagogue and didn't have to drive (because I hate driving in San Francisco).  It was perfect!

The Hebrew Reading Crash Course (yes, that's really what it's called; look at my little diploma up there) was a lot of fun.  It teaches one letter at a time and has you practice syllables, then starts putting the syllables together into words.  The next thing you know you're actually reading Hebrew.  I even recognized some of the very few Hebrew words I know (such as the prayer over wine!).

The instructor (the Rebbetzin of the synagogue) warned us that Hebrew as taught in the course is very formal and somewhat archaic, and also that the extremely helpful vowels which are used throughout are not usually found in everyday Hebrew writing.  But I figure I'm off to a great start.

The class is offered through the National Jewish Outreach Program, which also has a Hebrew Reading Crash Course II.  Everyone in the class told the Rebbetzin that we'd love to take the second course.  And there's even a Hebrew Writing Crash Course!