Own a Piece of History

A common dream among genealogists is to have photographs of ancestors and other relatives.  I recently found two vendors on eBay selling photos that previously belonged to newspapers, wire services, and photography agencies.  While most of the photos are of celebrities, athletes, politicians, royalty, and other well known individuals, several are of more "everyday" people.  Maybe one of your relatives can be found there?

One of the sellers is Historic Images.  He scans historic photos for newspapers and then is permitted to sell the originals.  The images he posts are clean and clear; he adds watermarks to make downloading them less attractive.  Most of the photos he sells have typed descriptions on the backs.  He gives a lot of information about the photo but doesn't always list all the names that show up in the descriptions.  He also has an eBay store with Buy It Now items (photos that did not sell in auctions) and a regular sales site online.

I started watching his auctions regularly after a photo with my aunt's uncle showed up.  I search every so often for the name McStroul, as it is unique to that family and if I get a hit I know it's them.  I was able to buy this one for the family (Fred McStroul is in the front row, far right): 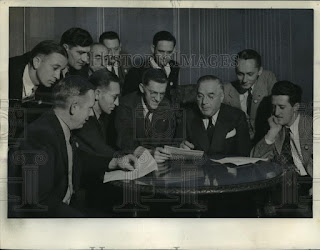 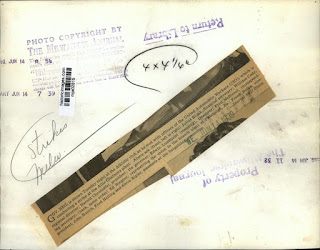 Some recent examples of ordinary people that caught my eye:

1931:  French war orphan Pierre C. Waters and his grandmother
Pierre's father was killed in "the war" (presumably World War I).  Apparently his mother and stepfather, Magnon, had also died.  His grandmother, Mrs. Elizabeth Waters, traveled to France and legally adopted him, then brought him to New York.

1933:  Coran Capshaw, clerk of the vestry of the Church of St. Mark's-in-the-Bouwerie
Capshaw didn't like the then-rector of the church and was photographed in conjunction with an election by parishioners of a new vestry.

1946:  Tess Klein complains about elevator operators' strike
Tess, of The Bronx, was working at 10 East 40th Street (Manhattan, I believe) and had to walk up eleven flights of stairs before posing for her photo.

1946:  George Kriloff, a conductor with the Pennsylvania Railroad and a second photo
Kriloff was not working due to a nationwide railway strike.  He was 29 years old and lived at 1216 26th Avenue, Astoria, New York.

Not everyone is named in the photo descriptions, though.

1965:  Policeman at World's Fair guards Indonesian entrance
Indonesia decided it would not participate in the 1965 season, so its people were barred from entering the Indonesian pavilion.  The policeman was not named, but it's a clear photo of him.

The other person selling the same types of photos has the username NordicPix.  The standard paragraph he puts on every listing includes, "International Magazine Services photo archive. IMS was a editorial press photo archive in Scandinavia founded in 1948 but evolved from older archives that have images in the collection also. The archive is in great condition and been in storage for a long time and the images in the collection are now being sold off one by one. The images in this archive where distributed in only 10-15 copies around the world at the time and many copies have been lost or damaged during time, each copy from the collection is therefore very rare and unique."

This seller has a similar mix of photos, but from what I've seen, the majority of the photos do not have much, if any, description on the back.  Sometimes the seller adds a paragraph of historical information about the subject of the photo if it's a famous person, particularly if the photo itself doesn't have much info on it.  The names of ordinary people usually don't appear on the photos at all.  The locations also are often not identified.

Here are some of the everyday people whose photos are currently available:

1940's:  10-year-old Boris, a Soviet child who had already earned a medal as a messenger with the Red Army

undated:  a mother (maybe Thost?) reading to her children

undated:  a man using a microscope outdoors in the snow

Both sellers make it clear that all they are selling is the physical photographs.  No copyright is transferred by the sale.  A few of the photos available predate 1923 and are therefore in the public domain.  Many of the photos fall into the 1923–1963 period when copyrights had to be renewed to remain active, and odds are that most of these photos probably are no longer copyrighted, but that's up to you to determine.

Due to the fact that neither of these sellers has complete identifying information for all of the photos in their descriptions, to really get an idea of what they have, you have to browse their listings on a regular basis.  I have found some interesting photos that way that never would have come up on a search.  It's also interesting to see the photos of famous people.  I bought a photograph of baseball player Hank Aaron for my brother, because Aaron was his favorite player.  I also found a photo of Ellis Island from right before it was closed, which I bought for myself.

I have no financial interest in either Historic Images or NordicPix, and neither seller in any way contributed to this article.  I'm just a geeky genealogist who likes photographs and wanted to let others know about these interesting resources.  I hope you find a great photo of a family member!
Posted by Janice M. Sellers at 1:25 AM