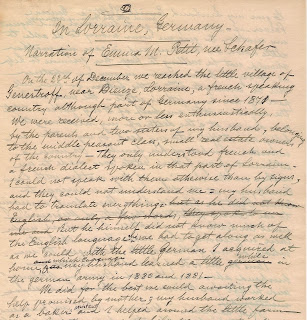 Last week I started working on the "treasure chest" that another genealogist gifted to me, beginning with Emma M. Schafer, the person who seemed to be the focus of the story.  The first document chronologically in the story related the early years of her life, up to her marriage at the age of 16 and departure to Europe with her husband soon after.

The second document is titled "In Lorraine, Germany - Narrative of Emma M. Petit, nee Schafer."  It consists of four sheets of bond paper with no apparent watermark, with handwriting on both sides of each sheet.  Judging by the point of view of the narrative, it seems to be written by Emma herself.  As the letter is so long, this week I will post my transcription of the first four pages and finish with the final four pages next week.  My transcription follows (for ease in reading, I have chosen not to transcribe the text that Emma struck out):

On the 23rd of December we reached the little village of Genestroff, near Dieuze, Lorraine, a french speaking country although part of Germany since 1870 —  We were received, more or less enthusiastically, by the parents and two sisters of my husband, belonging to the middle peasant class, small real estate owners of the country —  They only understand french and a french dialect spoken in that part of Lorraine.  I could not speak with them otherwise than by signs, and they could not understand me = my husband had to translate everything.  But he himself did not know much of the English language and we had to get along as well as we could with the little German I acquired at home, which language my husband learned a little while in the german army in 1880 and 1881 —

We did for the best we could awaiting the help promised by mother; my husband worked as a baker's assistant and I helped around the little farm —

But the promised help never materialized and in 1885 it was necessary for me to do something as I was threatened by the parents of my husband to be sent away if I could not procure the means to establish a bakery in Dieuze, the nearby town, as my husband told them we would do –

Under the pression of interested advice I consented, in June 1885 to give my husband Emile Petit a "General Power-of-Attorney" to go to Missouri, armed with this Power-of-Attorney, and request my mother to give me some money to be able to settle down in business, and in case my mother should not be willing to keep her promise to help us, to try to borrow some money on whatever will be coming to me in the future, or even sell part of my father's estate –  We were under the impression that one half of my father's estate was due me at the death of my mother, this belief was stuffed into my head by my mother and interested members of her family –  As never a settlement of my father's estate was made to me neither on the marriage of my mother with Louis Curdt, nor at the time of my marriage to Emile Petit, as should have been done according to the "Revised Statutes of the State of Missouri" — until the death of my mother I remained under these impressions and never knew that the whole of my fathers estate belonged to me.

Thus on the 10th of June 1885 I gave my husband above mentioned "Power-of-Attorney", and he left for Missouri.

What happened in Missouri while my husband was there is a dark chapter, for myself as well as for Emile Petit, my former husband –

Petit reached Missouri O.K., saw my mother who put him off for a few days, during which days Petit came in the hands of some friends of Louis Curdt and his wife Elizabeth Curdt.  These friends formed an iron wall around Petit who trusted them in everything they proposed or said.  They advanced him

money for his daily expenses and kept him going, drinking and having a good time.  He never consulted a lawyer and allowed himself to be taken about like an automaton.

While this was going on I received from an agent of my mother, a prepared act for my signature before a public officer and a letter from my mother –  This document was written in English and there was not a single person in the Country of Dieuze, Lorraine, who could translate or explain it.  I, without instruction, having hardly ever been to school, did not understand anything of it, but for me my mother was a holy body, who surely would not and could not rob me.  In her letter she told me to sign this document in presence of witnesses and I signed it, because she told me in her letter that she could not give me any money except if I sign this document, and I signed it, and I remained under the impression that the document was some kind of acknowledgment of having received or our going to receive a certain amount of money, to help me out in Lorraine, money which would later be deducted from whatever should be coming to me – and I signed and returned the document to the address indicated, and wrote a few words to mother –

Emile Petit, in a sworn statement, says that Emma's mother sent for him from France, but did not give him any information or instruction about any property –  He says also that the property was not sold.  He says textually, under oath and before witness David J. Kelly, a Notary Public, I believe, viz =

As far as I am concerned I never knew what actually happened in Missouri, between Emile Petit and my mother –  Petit came back with part of the money he received, telling me that was what my mother gave him to help us out and soon after bought a backery [sic] in Dieuze, Lorraine, a small town of about 5000 french speaking population in Lorraine.

What an interesting situation:  Emma was married off to a man who spoke almost no English; she spoke no French and only a little German.  Obviously, the two of them being able to communicate was not high on her mother's list of priorities.  Emma points out more than once that she was not well educated, which was commented on in the typed history of her early life.  And she mentions the "Revised Statutes of the State of Missouri", which was quoted in the typed narrative.  I'm starting to wonder if perhaps Emma was the person who typed that.  This narrative is not dated, but Emma seems to have acquired some education since the events she writes about, as her writing for the most part has reasonable grammar and good spelling (relative to the time).

Whereas in the typed history we don't know who the writer was, in this narrative we are starting to hear from Emma herself about how her mother apparently swindled her out of the inheritance due to her from her father.  She isn't saying it directly, but she does seem to be dancing around the edges.

I kind of feel sorry for Emile Petit so far.  He seems to be a pawn on both sides, being told what to do and where to go.  His parents come off as a little harsh — threatening to send Emma away because she isn't coming up with money to open a bakery?  Maybe the only reason they thought the marriage was acceptable was because Emma was supposed to come with a dowry.

I had a little trouble finding Genestroff.  In French (or should I write "french", as Emma does?) it's Guénestroff and has been subsumed, with the community of Kerprich-lès-Dieuze, into Val-de-Bride (sorry for the French, but the English-language Wikipedia entry has practically no information), in the Moselle department of Lorraine.  Dieuze, the other town that Emma mentions, also has a seriously deficient entry in the English-language Wikipedia.  According to Google Maps, Val-de-Bride and Dieuze are less than 2 miles apart.

When I read Emma's comment that Lorraine was a French-speaking country but part of Germany since 1870, it reminded me of the J. K. Rowling episode of Who Do You Think You Are?, where Rowling learned that her Alsatian ancestor had become German after Germany took control of Alsace-Lorraine (Elsass-Lothringen, in German) in 1870, after the Franco-Prussian War.  Emile Petit's family was obviously caught in that also, but unlike Rowling's Schuch family, with a name like Petit, they appear to have had a French rather than German background.

Next week, the rest of Emma's narrative!
Posted by Janice M. Sellers at 1:17 AM