Did Your Relative Invest in Stock Certificates? 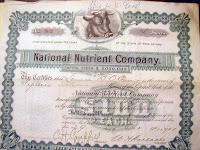 I'm always on the hunt for documents relating to family members.  I became interested in stock certificates when my half-sister sent me a photo of one that had belonged to her great-grandmother.  In 1901, Louise O'Connor bought 15 shares in the National Nutrient Company of New Jersey.  Apparently the company made a "milk powder" which had all the nutritional value of milk.  Perhaps she was interested in nutrition for her family?  We don't know for sure, but it seems to indicate something about her.  One episode of History Detectives focused on stock certificates from Marcus Garvey's Black Star Line and discussed what the purchase of those certificates said about the person who bought them.

I wrote recently about two vendors on eBay who sell old press photos that often have everyday people in them.  Now I've found a vendor who has several old stock certificates.  He appears to be selling them strictly for the interest in the certificates, because he is not including the names of the purchasers in the descriptions of the items.  (You'd think these sellers would try to come up with more ways to cross-market their items, but no.)  A lot of these certificates have people's names on them, people who might have descendants or other relatives researching them.  I would love to find one with my relative's name, but so far I haven't.  Just to spread the word, here are some items expiring today, January 1, and Saturday, January 2.

I missed the expiration times for a couple of certificates.  I don't know if this seller relists items, but it probably wouldn't hurt to send him a message if these names are familiar:

And if you ever come across any stock certificates for the Lloyd Oil Corporation, let me know, ok?  The closest I've come is this tiny little image I found online one day.
Posted by Janice M. Sellers at 2:10 AM