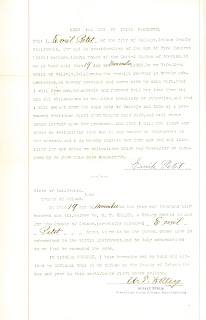 Last week's document regarding Emma (Schafer) Petit was an insurance policy dated May 2, 1901.  The third document I have jumps ahead five and a half years to November 1906.  Technically, this could be considered a document about Emile Petit, her husband, but she is mentioned in it, and it seems to be more relevant to her.  The document is on a legal-sized (8 1/2" x 14") piece of lightweight watermarked bond paper.  It does not have a title.  An embossed notary seal is at the bottom of the page.


KNOW ALL MEN BY THESE PRESENTS:

That I, Emil Petit of the City of Vallejo, Solano County California, for and in consideration of the sum of Five Hundred ( $500 ) Dollars, lawful money of the United States of America, to me in hand paid this 19 day of November, 1906, by my Wife, Emma Petit of Vallejo, California, the receipt whereof is hereby acknowledged, do hereby covenant and agree with my said wife, that I will from now, henceforth and forever hold her free from any and all obligations to me, either pecuniary or otherwise, and that I will depart from the said City of Vallejo and take up a permanent residence apart from her, my said wife, and will never again intrude upon her presence, and that I will not incur any debts or obligations that can in any manner be chargeable to her account, and I do hereby absolve her from any all liability for any debts or obligations which may hereafter be incurred by me from this date henceforth.

On this 19 day of November in the year one thousand nine hundred and six, before me, W. T. KELLEY, a Notary Public in and for the County of Solano, personally appeared Emil Petit known to me to be the person whose name is subscribed to the within instrument, and he duly acknowledged to me that he executed the same.

IN WITNESS WHEREOF, I have hereunto set my hand and affixed my Official Seal at my office in the County of Solano, the day and year in this certificate first above written.


W. T. Kelley
NOTARY PUBLIC
In and for the County of Solano, State of California

We already knew from Emma's handwritten narrative that she had divorced Emile Petit, so this official statement that they are separating their financial responsibilities is not surprising in and of itself.  I have seen similar items in newspapers, where one half of a married couple announces publicly that he (or she) is no longer responsible for the debts and obligations of another.  This is the first time I've seen a stand-alone document that accomplishes the same, and this one is even notarized.  (I'm sure there's a name for this type of document, but I don't know what it is.  If you do, please post a comment!)  Emma was serious about getting her deadbeat alcholic husband out of her life, even being willing to pay $500 to accomplish it.

The way it's phrased in the next to last paragraph, it sounds as though Emile signed the document not in the presence of the notary, even though all the handwritten parts (except for Emile's signature) seem to be in the same handwriting as the notary's signature (keeping mind, of course, that I am most decidedly not qualified as a document examiner, although I do know one).  Maybe it's a standard phrasing that was used at that time?  Nowadays, I'm accustomed to the notary's section saying that the document was signed in the presence of the notary.

I'm used to seeing different spellings of names, but I noticed here that Emile's name is spelled in the document without the final "e" both times, even though Emile signed with the e.  At least he knew how to spell his name.

Emma wrote in her narrative that Emile liked to gamble and drink when he had money.  How long did it take him to go through this $500?

If Emile had visitation rights to see the children, I guess a third party had to help, as Emile said he wasn't going to see Emma anymore.

When Emma took out her insurance policy she was living in Vallejo.  She was still living there in 1906 when this document was signed.
Posted by Janice M. Sellers at 10:09 PM