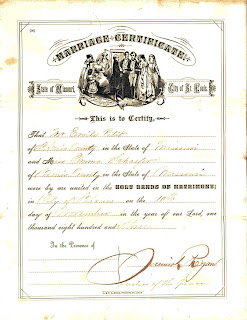 Now that we have a good overview of the timeline of Emma Schafer's life at least up to about 1920, from her early years through two marriages, I'm going to work through other documents in chronological order from the beginning.  Among the documents relating to Emma was what appears to be an original copy of her 1883 marriage certificate.  (I wish I had something like this for my own family!)  It might be only a "souvenir" copy, because no witnesses are listed, but it certainly looks old.  The paper has been folded many times.  The handwriting is light but clear; Jeremiah Ryan's signature is bold and dark.

Marriage Certificate
State of Missouri, City of St. Louis.
— This is to Certify, —

Two things surprised me about this:  They were married in the city of St. Louis, and the marriage was performed by a justice of the peace.  Not having the marriage in St. Louis County, where everyone lived, made me think that it might have been a deliberate choice to have them married away from prying eyes.  Considering the short amount of time this was apparently accomplished in, Mr. and Mrs. Curdt probably didn't want those prying eyes.  Once I thought about it, however, the short amount of time probably had something to do with the choice of a justice of the peace.  A pastor, priest, or other officiant from a church probably would have wanted the couple to have known each other a little bit longer than nine days.

If this is only a souvenir or "wall hanger" copy, original records might list who the witnesses were.  The typed narrative asserted that the marriage took place in front of witnesses and Emma's mother, Mrs. Curdt, so their names should appear somewhere.  Or maybe the witnesses didn't want their names associated with the event?
Posted by Janice M. Sellers at 10:01 AM