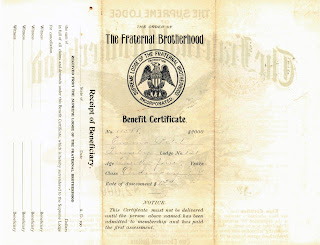 The second document I have chronologically for Emma (Schafer) Petit is an insurance policy from 1901.  This is an 11"x17" piece of paper, designed to be folded in half and then as a trifold.  The writing is faint but legible.  The signatures are strong and dark.  I've underlined the parts that were handwritten on the policy.

THE ORDER OF
The Fraternal Brotherhood
Benefit Certificate
No. 11588, $2000
Emma Petit
Trinity Lodge No. 121
Age Thirty-four, Years
Class Ordinary
Rate of Assessment $1.50
——
NOTICE
This Certificate must not be delivered until the person above named has been admitted to membership and has paid the first assessment. 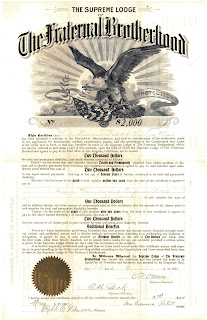 Emma mentioned three children in her handwritten narrative but didn't name them.  Now we know who they are!  It will be interesting to see whether Mary, Camilla, and Eugene show up in later documents.

We learn here that Emma had returned to the United States.  The last we heard from her, she was in Dieuze with her husband's parents.  She had mentioned Florida but not California, so it was surprising to find her in Vallejo.

There's no indication of why Emma took out an insurance policy at this time.  I don't know if she was going to be traveling, if she was worried about a situation with her husband (Emile Petit), or if she was just thinking about the welfare of her children.  I'd like to think that she was simply being a good mother.  I did notice that Emile's name doesn't appear anywhere on the document.

I was amused to see that reaching the age of 70 was considered "total and permanent disability."  Some things have changed over the years.

I tried to find information about the Fraternal Brotherhood, but not much seems to exist online.  A 1905 photograph of their offices in Los Angeles is online on Wikimedia and USC's digital library.  A small feature piece about the organization appeared in the Los Angeles Financier of October 3, 1906, and a short article about the organization's history was published in the Los Angeles Herald on March 29, 1908.  And it is included in a listing of fraternal benefit orders on Wikipedia; it existed from 1896 to at least 1923 and apparently had a "secret ritual, passwords, grips and signs."  The Brotherhood seems to have had a decent reputation, at least.  Well, if you ignore the secret ritual stuff.
Posted by Janice M. Sellers at 1:45 PM