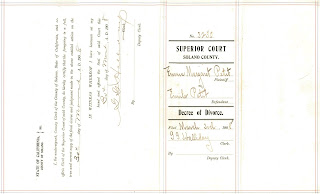 When I read the receipt of payment for Emma Petit's lawyer in conjunction with her divorce case, I was surprised it came chronologically before the divorce itself was finalized.  Maybe the lawyer was not concerned about the final decree taking place?  Whatever the reason, the next item is Emma's Decree of Divorce.  This appears to be an original document from the Superior Court of Solano County, with an impressed seal.  It is watermarked bond, 14" x 8 1/2".  The paper may have originally been white, but it is now a creamy off-white.  I've underlined the parts that are handwritten.

I, the undersigned, County Clerk of the County of Solano, State of California, and ex-officio Clerk of the Superior Court of said County, do hereby certify that the foregoing is a full, true and correct copy of the final decree and judgment madein the above entitled action on the    30th    day of    March    , A. D. 1908 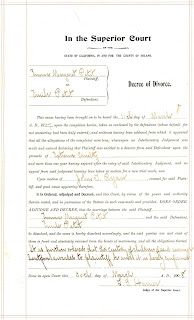 In the Superior Court
OF THE
STATE OF CALIFORNIA, IN AND FOR THE COUNTY OF SOLANO.

This cause having been brought on to be heard the   11th   day of     March         A. D., 1907 , upon the complaint herein, taken as confessed by the defendant (whose default for not answering had been duly entered), and evidence having been adduced from which it appeared that all the allegations of the complaint were true, whereupon an Interlocutory Judgement was made and entered declaring that Plaintiff was entitled to a divorce from said Defendant upon the grounds of     Extreme Cruelty         and more than one year having expired after the entry of said Interlocutory Judgment, and no appeal from said judgment haveing been taken or motion for a new trial made, now
Upon motion of             John T. Ryan             , counsel for said Plain-
tiff, and good cause appearing therefore,
It is Ordered, Adjudged and Decreed, and this Court, by virtue of the power and authority therein vested, and in pursuance of the Statute in such case made and provided, DOES ORDER, ADJUDGE AND DECREE, that the marriage between the said Plaintiff,      Emma Margaret Petit       and the said Defendant,      Emile Petit      be dissolved, and the same is hereby dissolved accordingly, and the said parties are and each of them is freed and absolutely released from the bonds of matrimony, and all the obligations thereof.
It is further ordered that the custody of children of said marriage
heretofore awarded to plaintiff be and it is hereby confirmed.
______________________________________________________
Done in open Court this     30th .    day of      March           A. D., 1908

In Emma's handwritten narrative, she mentioned that Emile had not appeared in court for the divorce suit, and here that's confirmed.  The case was first heard on Match 11, 1907, four months after Emile accepted $500 from Emma to leave her and Vallejo, so she paid him off before filing.  Since part of his agreement was that he would "never again intrude upon her presence", maybe that's why he didn't appear in court.

Emile and Emma's children are mentioned almost in passing in the decree, only to confirm that Emma will retain custody of them, but they are not named.  If the file still exists in Solano County, it should have more details about them.

As an editor, I was amused by some of the spelling I found.  On the outside jacket we see "judgment", but on the inside decree it's spelled "judgement" once and "judgment" twice.  Somehow I don't expect legal court papers to have spelling errors.  And it's in the preprinted part!
Posted by Janice M. Sellers at 11:57 PM