Treasure Chest Thursday: Emma Has Remarried and Is Living in Europe! 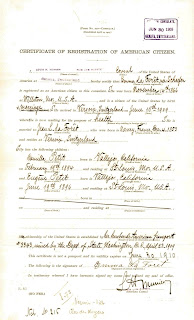 The next document in the saga of Emma Schafer is a Certificate of Registration of American Citizen dated June 30, 1909.  As with almost all of the documents I was gifted, this is an original.  It is a creamy off-white and may have been white originally.  It has been folded several times but is still sturdy.  It is 8 1/2" x 14" and watermarked ("Rolleston Mills").  It has an impressed seal of the American Consulate in Geneva, Switzerland in the lower-left corner.  As usual, I have underlined the parts that were entered on the preprinted form.  Most are handwritten, though a few are stamped.  Because I didn't want to try to create a table to put the descriptions of all the entries lined up beneath their lines, I've typed them after the lines and put them in a smalller font size.


CERTIFICATE OF REGISTRATION OF AMERICAN CITIZEN.

Her citizenship of the United States is established by    her husband's American passport #3343, issued by the Dept. of State, Washington, D.C., April 23. 1909     (Nature of proof of citizenship produced.).

This certificate is not a passport and its validity expires on     June 30. 1910. (Date of expiration.)
The following is the signature of     Emma La Foret     [signature] (Signature of person registered.)
In testimony whereof I have hereunto signed my name and affixed my seal of office.

This form made me really curious about how in the world Emma met Jean La Forêt.  The second half of Emma's handwritten narrative said that in 1908 she went to Florida and married again and then went to Europe in 1909, but I guess the timeline didn't really sink in for me until reading this form, particularly after having gone through the previous few items from her timeline.  We know from the letter from her lawyer dated April 8, 1908 that she was apparently then still in Missouri.  What we don't know is what took her to Florida and how or when she met her second husband.  However all that happened, by June 30, 1909 she was in Switzerland, though without her children from her first marriage.

We learned from Emma's 1901 insurance policy that the names of her children were Mary, Camilla, and Eugene.  Mary is not included here; was that because she was no longer living?  In my discussion of that same second half of Emma's narrative, I had interpreted her sentence "This daughter is now the wife of William H. Schulte, a farmer of Maryland Heights, in this County" as referring to Emma's daughter, to whom she referred in the sentence preceding thsy one:  "I even sent my oldest daughter to her [Emma's mother] for a while."  Now I'm wondering if the daughter who married William Schulte was Emma's half-sister Alvina, her mother's daughter.  I suppose it's also possible, since we previously did not know the ages of Emma's children, that Camilla and Eugene are listed because they're minors and that Mary is an adult.  I also wonder why Camilla and Eugene aren't with Emma.  Did Jean not like them?  (And I've pegged him as the hero of this story!)   Are they with their sister, Mary, if she is still alive?  Ah, well, that's for future research.

My first reaction at seeing that Emma's American citizenship was predicated on her husband's passport, instead of the fact that she was native-born, was annoyance at a chauvinistic practice.  After I thought about it, though, I remembered that the Expatriation Act of 1907 removed American citizenship from an American woman who married an alien.  Also, since Jean's passport number was referenced but not one for Emma, she may not have had her own passport and may have been traveling on his.  So I'll concede that there is some logic to how her citizenship was established — but I'm still kind of peeved.

I've never registered with a consulate or embassy when I've traveled abroad (though it may have been done for me when I've traveled with groups or with my family), so I wondered why someone would do so.  According to the U.S. Department of State Web site, registering gives you a point of contact in the foreign country for lots of different situations.  I learned something new today!

I noticed that Eugene's name was spelled with an accent — Eugène — in the correct French way.  I wonder if he pronounced his name in the French manner — "oo-zhen" is a close approximation — or the English way — "yew-jean."
Posted by Janice M. Sellers at 11:23 PM