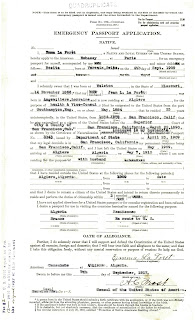 This week's document in the life of Emma Schafer is a copy of her emergency passport application from 1917.  This is an original, marked "quadruplicate", so I believe it was her copy that she kept after sending the original to the consulate.  It is pale bluish-green, which scanned with no color; I guess copy machines still don't do blue well.  It is legal size, 8 1/2" x 14", two sided, and has four impressed seals of the American Consulate in Algiers at the bottom, only one of which kind of appears in the scans.  The paper is watermarked with the Great Seal of the United States.  In my transcription I have underlined the information that was entered onto the preprinted form.  I also have again put the descriptions of the fields in small type and placed them after the fields.

NOTE.—This form is to be filled out in duplicate, one copy being retainedi n the files of the office by which the emergency passport is issued and the other forwarded to the Department.

I have not applied elsewhere for a United States passport or for consular registration and been refused.

Further, I do solemnly swear that I will support and defend the Constitution of the United States against all enemies, foreign and domestic; that I will bear true faith and allegiance to the same; and that I take this obligation freely, without any mental reservation or purpose of evasion:  So help me God.

____________________
* A person born in the United States should submit a birth certificate with his application, or, if the birth was not officially recorded, affidavits from the attending physician, parents, or other persons having actual knowledge of the birth.
† If the applicant's father was born in this country, lines should be drawn through the blanks in brackets.
‡ It is desirable, but not absolutely necessary, that the certificate of naturalization of the father be submitted.
§ See circular instruction of July 26, 1910, entitled "Protection of Native Americans Residing Abroad."  1–91


[Stamped sideways in lower left corner:]
Fee $2 — U. S. Gold equal to Frs.
12—— paid by affixing stamps to
the original copy of this document 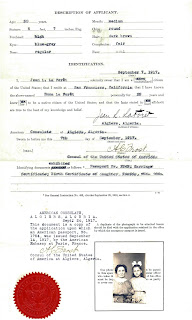 
September 7, 1917.    (Date.)
I,    Jean L. La Forêt    , solemnly swear that I am a {native naturalized} citizen of the United States; that I reside at    San Francisco, California  ; that I have known the above-named    Emma La Forêt    personally for   20   years and know {him her} to be a native citizen of the United States; and that the facts stated in {his her} affidavit are true to the best of my knowledge and belief.

A duplicate of the photograph to be attached hereto should be filed with the application retained in the office by which the emergency passport is issued.

[typed to left of above instructions regarding photograph]

[Photograph of Emma La Forêt and Rosita covers middle of the following paragraph:]

The reason for the emergency passport request would seem to be due to World War I because of the timing, although the application was submitted three years after war had broken out in Europe following the assassination of Archduke Franz Ferdinand.  While I can find references to Algerians fighting during the war and battles in other parts of North Africa, the primary actions in Algeria seem to be related to independence movements.  Whatever the specific cause, travel during this period would have been difficult, so the decision to go back to the United States at this time could not have been an easy one.

From the passport application we learn that Emma now has another daughter, Rosita, who was born in Switzerland in September 1909, when Emma was almost 43 years old.  Emma registered as an American citizen in Versoix in June 1909, so she was about six months along in her pregnancy when she arrived.  That must have been a fun cross-Atlantic voyage.

There are several discrepancies in the information given on this application as compared to what we have learned previously. Here Emma said that her husband Jean was born in Angevillers, Lorraine, whereas on her registration form in Versoix she said he was born in Nancy, France.  While both locations are in Lorraine, they're almost 60 miles apart.  Maybe Nancy is the largest city close to Angevillers, but that's a pretty significant difference.

The passport application also states that Jean had lived 25 years uninterruptedly in San Francisco.  He was a U.S. Marine for several of those years, and I doubt he lived uninterruptedly anywhere close to 25 years.  I realize that while in the military you can maintain a permanent residence that is different from where you are assigned, but I'm going to be surprised if I find that he claimed San Francisco that entire period.

Another conflict is within the information on the form itself.  Emma stated that her daughter Rosita was born in Versoix, Switzerland on September 4, 1909.  She also stated that she arrived in Algiers on May 7, 1910.  Yet she later said that she had resided outside the United States only in Algiers, from 1909 to the present date (September 7, 1917).  So when she was in Switzerland she wasn't actually residing there?  I guess the consulate and embassy didn't consider that to be a problem.

A minor discrepancy is that Emma's birthplace is spelled Welston here and Wellston on the registration of American citizen form.  As spelling is still fairly fluid at this time, that's not much of a surprise and is not significant.

Jean and Emma are still on the same passport, #3343, as listed on the registration of an American citizen, even though it is eight years later.  I'm used to passports during this time being valid for shorter periods.  Maybe Department of State passports were valid longer or were open-ended.

We have a physical description of Emma on the second page of the application.  She was 5'7", fairly tall for a woman at this time.  At the age of 50 she still had dark brown hair (naturally?).  I noticed they didn't ask for weight, though.

An interesting piece of information is in the "Identification" section.  Jean said he had known Emma for 20 years, which would be from about 1897.  At that time Emma was still married to Emile and living in Vallejo.  From the documents I have, she seems to have lived in Vallejo until she went to Missouri.  How did these two people meet?  It does make sense that they knew each other in the San Francisco area, though, because otherwise they would have met in Missouri or Florida prior to their marriage, with a small window of time.