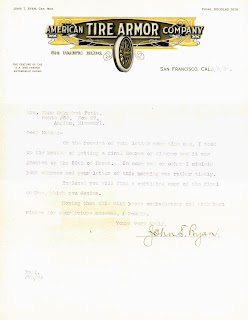 This week's document is a letter from Emma Petit's lawyer, John T. Ryan, to Emma.  This is another piece of paper that may have been white originally but now is a creamy off-white.  It is 8 1/2" x 11" and has two folds that suggest it was mailed in a regular business envelope.  It also has another fold made when the bottom third of the letter was folded.  It is typed on letterhead from the American Tire Armor Company, of which John T. Ryan was the general manager.  When I received it, the letter was in an oversized business envelope.  It does not appear to be the envelope in which Emma received the letter, as no mailing address or postage stamp is on it.  The word "Divorce" is written on the envelope in pencil.

On the receipt of your letter some time ago, I took
up the matter of getting a final decree of divorce and it was
granted on the 30th of March.  In some way or other I mislaid
your address and your letter of this morning was rather timely.
Enclosed you will find a certified copy of the final
decree, which you desire.
Hoping that this will prove satisfactory and with best
wishes for your future success, I remain,
Yours very truly,

I have to admit that I'm a little surprised Emma's divorce lawyer was the general manager of a tire-related company.  Maybe he handled the case as a favor for Emma.  He apparently had someone available to type the letter for him, as evidenced by the last line, "JTR/DA."  For those not familiar with secretarial conventions, that means the letter was typed for JTR, i.e., John T. Ryan, and was typed by DA, whoever that might be.

The letter was mailed to Emma in Missouri.  We have no information about when she went there or how long she stayed.  It took some searching to find Anglum.  It no longer exists under that name but was renamed Robertson in 1929 (for the man who paid for the design and construction of Charles Lindbergh's plane Spirit of St. Louis).  Then Google Maps refused to recognize Robertson as a location, so I had to go to Mapquest, which showed that it is about 12 miles from Clayton, which was mentioned in the typed narrative about Emma's early life, and 8 miles from Maryland Heights, where Emma wrote that her oldest daughter and her husband were living.  So it seems that some time after filing for divorce Emma decided to leave California, at least for a while, and go "home" to where her family lived.

The copy of the divorce decree to which John Ryan referred is probably the one that I described last week.  The two items appear to have been separated over time and during multiple changes of caretakers.

Speaking of Emma's divorce, two weeks ago I wrote that I was going to investigate "at some point" whether the complete file had survived.  Coincidentally, on February 6 I gave a presentation to the Solano County Genealogical Society.  While I was there I asked whether anyone knew about the status of divorce files from that far back.  One of the people attending was actually a volunteer archivist for the Solano County Archives!  She told me where to send an inquiry, and I have learned that the file does indeed still exist.  One important fact that I've already been told is that Emma filed in 1906, before she paid Emile to leave.  I'm looking forward to reading the file when I receive a copy.

And of course I had to look up the American Tire Armor Company.  John Ryan was one of five men who organized the company in Vallejo in 1908, with the aim of manufacturing and marketing a steel automatic automobile tire.  In March 1908 he applied for patents for a tire protector and an armored pneumatic tire, assigning the patents to the company.  A large ad seeking investors for the company was published in the San Francisco Chronicle on June 14, 1908.  Ryan was granted his patents in 1913. 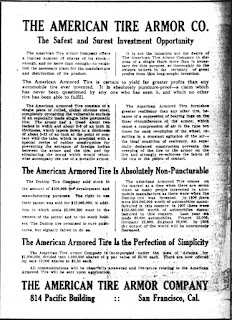 One last comment:  Who would have guessed that in 1908 a car show in Fresno would be considered on the same level as one in San Francisco?
Posted by Janice M. Sellers at 10:29 PM