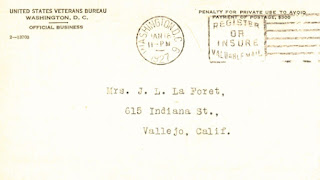 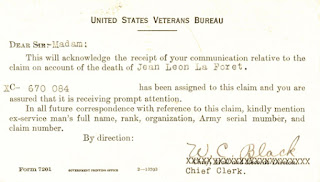 This postcard is from 1927.  It is another preprinted 3 1/2" by 5 1/2" postcard with an acknowledgment on the back and address on the front, similar to the postcard I described last week.  It appears to be about 10# cardstock, the same yellowish-buff color that resembles the lower card in last week's post.  Both sides of this postcard look much lighter in the scans than in real life.  This card has no creases but has three small circular indentations in the middle.  The following transcription has information that was entered by hand underlined.

Dear Sir: Madam:
This will acknowledge the receipt of your communication relative to the claim on account of the death of Jean Leon La Foret.

XC– 670 084                   has been assigned to this claim and you are assured that it is receiving prompt attention.
In all future correspondence with reference to this claim, kindly mention ex-service man's full name, rank, organization, Army serial mumber, and claim number.

This postcard is dated less than two months after the previous acknowledgment.  Emma is at the same address in Vallejo.  Things that differ are the claim number — on the previous card it was WO1560956 — and the department handling the correspondence.  The 1926 postcard was from the Department of the Interior, Bureau of Pensions.  This postcard from 1927 came from the Veterans Bureau.  According to a short note on Wikipedia, both of these agencies, in addition to the National Home for Disabled Soldiers, handled "various benefits" for servicemen through the 1920's.  I wonder if poor Emma had to communicate with both divisions on a regular basis?  Better yet, I wonder if the different records are still separate or have been consolidated into one file?  I guess I'll find out when I order them, won't I?

I also noted that Emma is addressed with her late husband's name instead of her own given name.  Perhaps the Veterans Bureau (or Chief Clerk W. C. Black) was more formal than the Bureau of Pensions.

The disadvantage of a preprinted form is that it usually doesn't cover all the possibilities.  On this card "Sir" was struck through and "Madam" was typed im its place.  The card refers to the ex-serviceman's Army serial number — except that the card has "mumber"; is that a mumbled number? — but Jean La Forêt was a Marine.  Interesting that "Army" was not struck through and replaced by "Marine."
Posted by Janice M. Sellers at 10:28 PM