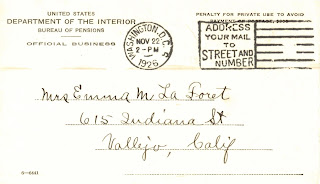 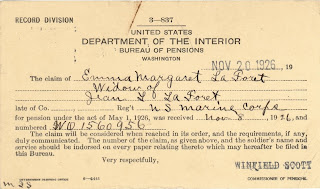 While the previous document I discussed for Emma is from 1917, this one leaps ahead to 1926.  (Maybe Emma didn't find anything in between worth keeping?)  This is a 3 1/2" x 5 1/2" postcard with a preprinted acknowledgement with some lines to fill out on the back and a mailing address and postmark on the front.  It's probably 10# cardstock, a yellowish-buff color (close to that in the bottom image above; I don't know why the top image scanned so much lighter).  Three corners have creases in them; the back has a rust mark at the top left by a paper clip.  In my transcription below I have underlined the information that was entered by hand or stamped on the card.

——————
UNITED STATES
DEPARTMENT OF THE INTERIOR
BUREAU OF PENSIONS
WASHINGTON

Probably the most important information to be learned from this is that Jean La Forêt died sometime between the issuance of Emma's 1917 passport and the application for a widow's pension for which this is an acknowledgment.  The "act of May 1, 1926" under which she applied was for veterans of the Spanish-American War.

Another fact gleaned from the postcard is that Emma was living in Vallejo again.  When she applied for her emergency passport, she said her permanent residence was in San Francisco, which must have been where Jean La Forêt was living, because she lived in Vallejo prior to moving to Missouri.  As this postcard is nine years after the passport and I have no documents between the two, I don't know (yet!) if she ever actually lived in San Francisco herself.

I was wondering what the "M I S" handwritten in the lower left corner of the back of the postcard meant.  I realized after looking at the rubber-stamped "WINFIELD SCOTT" that it's probably the initials of the person who actually filled out the postcard.

When I saw the name Winfield Scott I first thought of the general after whom Fort Winfield Scott (first the installation now known as Fort Point and later an artillery post on the San Francisco Presidio) was named, but it couldn't be him, as he died in 1866.  Perhaps it was one of his descendants.
Posted by Janice M. Sellers at 12:22 AM