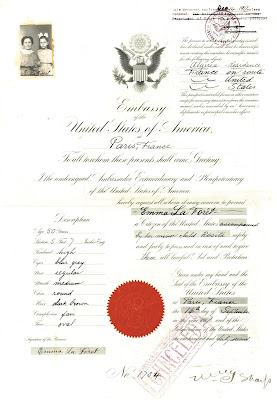 [rubber stamp of Paris Embassy seal]
Good only for
six months from date.

This passport is not valid for use in other countries
except for necessary transit to or from the countries
named, unless amended by an American
diplomatic or principal consular officer. 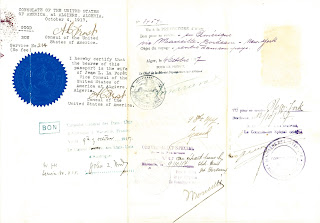 Wow!  I think this passport is very cool, and I am lucky to have it, even if it isn't for a member of my own family.  It's fairly straightforward; most of the information came directly from the passport application Emma submitted September 7.  It was processed very quickly, being dated September 14 in Paris.

The two sentences that were struck through on the front of the passport were probably for standard emergency passport procedures.  As Emma seemingly did not plan to travel again, they were not relevant for her.

The back of the passport has the same types of stamps that one might see in a passport today, and we can see Emma and Rosita's route from Algeria to Marseille to Bordeaux to New York.  I wish I could read the French signatures better, but c'est la vie!

My guess is that the "Canceled" stamp was put on the passport after Emma and Rosita arrived in New York.  As there is no date by the stamp, however, that is only a guess.

I have noticed that Emma consistently does not use the accent on Forêt.  (I wonder if that bothered Jean?)  As the passport was processed in Paris, I'm not surprised that they did include it.

When I received this gift of documents, the passport was folded and in the envelope in which it appears to have been sent:

This is pretty easy to read, so I won't transcribe it, but in the upper-right corner is a note in pencil:

This was the only part of Emma and Rosita's trip not present on the passport.  So they left Algeria three weeks after the passport was dated.  There's no indication when they received it.

A second notation in the upper-right corner is "103" in pen.  This isn't the passport number, and no other number on the passport matches it.  It's a mystery what it refers to.

The other item that was in the envelope was Jean La Forêt's business card:

The reason it was included was because of the handwritten note on the back:

This writing looks similar to that of Emma's handwritten narrative, and the name of Wm. G. Sharp bears no resemblance to the signature on the passport.  So Emma wrote a short note describing the passport, even though all of the information she wrote was included on the passport itself.  I know documentation is good, but I don't understand the purpose of her note.  On the other hand, it's nice to have one of Jean La Forêt's Vice Consul business cards.
Posted by Janice M. Sellers at 11:04 PM