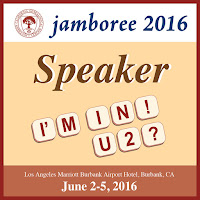 Well, I had a great time at Jamboree this year.  Every day was full of informative sessions, and I saw many genealogy colleagues in person.  I started with the first session every day and finished with the last.  I didn't realize how much I was doing until I discovered I was too tired to write every night!  But I didn't want to miss a thing.

The highlight for me on Friday (my first day at the conference, because I didn't go to the DNA Thursday events) was the "Manumissions and Motivations:  Uncovering Possible Family Connections" session by Michael Nolden Henderson.  He discussed a case study from his own family research, where reading between the lines in a manumission and extrapolating the information pointed to the probable family connection it concealed.  He has done some impressive research on his family, going back several generations.  I also heard Gena Philibert-Ortega talk about "Women's Work:  Tracing Your Ancestor's Ouccupations and Volunteer Work", which surprisingly had only about 20 people in attendance in a room capable of holding more than 100.  The day's (and the weekend's) "lowlight" was the Librarian's Boot Camp, which ran from 8:30 a.m. to 12:00 noon; I wish I had slept in.

Although I didn't attend the Friday banquet, I heard the next day that the speaker, David Rencher, gave my blog a callout.  Linda Okazaki, the California Genealogical Society president, told me that he showed an image of my post about the situation with the Solano County Archives in conjunction with his discussion about records preservation and the roles that genealogists can play in publicizing that type of information and bringing it to the attention of others.  That's pretty cool!

Saturday was full of great sessions.  Unfortunately, several of them were scheduled at the same time as mine, so I couldn't go to them in person!  But I was able to hear Michael Strauss talk about "Secret Societies:  Finding Your Ancestors in Fraternal Organizations", which was educational and fun.  He has found information about some truly "interesting" organizations, and he's a very enthusiastic speaker.  Karen Mauer Jones' presentation, "Low Bridge, Ev'rybody Down:  Navitaging the Erie Canal Records", and Connie Lenzen's on "Strategies for Adoption Research and Finding Other Missing Persons" were also full of useful content and methods.

Sunday was a shorter day, but many sessions still sounded really good.  The best was Pam Vestal's talk on "Voting Records:  Genealogy's Best Kept Secret."  While I don't think of voting records as that big of a secret, she has found some unusual items, including the fact that Multnomah County, Oregon voter cards asked for full names of the parents of the person registering, making them another place one can look for maiden names.  I also enjoyed the Rev. David McDonald's session, "An Illegitimacy:  A Mid-19th Century German Immigrant to the U.S.", and I have finally heard a presentation by JewishGen's Warren Blatt, who spoke on "Polish-Jewish Genealogical Research."

Part of what kept me so busy was the extra volunteering I was doing.  I was a room monitor for four speaker sessions and a research assistant for three time slots.  I also spent about an hour and a half at the California State Genealogical Alliance information table on Friday afternoon and spoke to a few people about the organization.  And CSGA helds its board meeting on Saturday, which I attended, because I am a board member.

I was able to do some socializing, though.  I went to lunch with seventeen other genealogists who have gone (or are going) through the ProGen Study Group, and now I have faces I can put to several names.  I also was part of the California Genealogical Society group photo, where I learned a fantastic way of organizing people for group photos.  I hope I remember it the next time the occasion arises.  And I ran into several friends just walking around.

I have to say I had a successful conference.  I learned a lot, saw old genealogy friends and made new ones, and had a great time!  About the only thing that could have made it better would be if I had won one of the door prizes, but I guess you can't have everything.

As if all that hadn't been enough, the day after the conference, I wrapped up my long weekend by speaking at the Jewish Genealogical Society of Los Angeles on Monday evening.  My presentation on finding women's maiden names went well, and a lot of people had great questions.  I left immediately afterward and made it back to Oakland at 3:00 a.m. Tuesday.  My car then proceeded to die on me later on Tuesday morning, but it managed to last long enough for me to pick my birds up from boarding and get them home.

I haven't driven to Los Angeles in a few years, and I have to admit I was surprised by the changes in what I saw on the way south.  There used to be several citrus groves along I-5, but now most of them appear to have been pushed aside in favor of stand after stand of almond trees.  Until I got close to the Grapevine, I had seen only one citrus stand.  Even down south I saw (yet more) almond trees.  There used to be many plantings of grapes, but this time I saw only a few.  Apparently almonds really do rule.  Also missing up north were the fun rhyming highway signs from Shane P. Donlon, who probably had been inspired by Burma Shave.  Now that I think about it, a lot of those signs were in the now-missing citrus groves.

One thing that hadn't changed was how many rivers, creeks, and other water courses were bone dry:  Ortigalita Creek, Salado Creek, Kern River, Arroyo Pasajero, and far too many more.  Of course, the Kern River flood canal ("flood" being a euphemism for agricultural run-off) wasn't wanting for water.  And somehow, Orestimba Creek managed to have a reasonable amount of water.  But it sure was a dry-looking drive down.
Posted by Janice M. Sellers at 1:09 AM