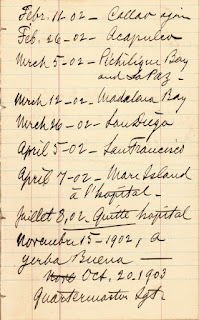 Jean La Forêt's diary holds yet more treasures to explore.  When last we left Jean, he had arrived in Valparaiso, Chile while serving with the U.S. Marines. 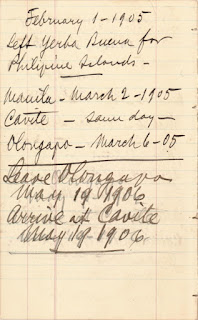 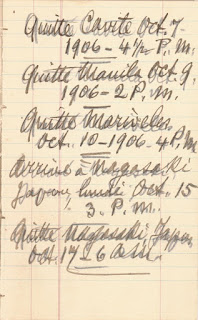 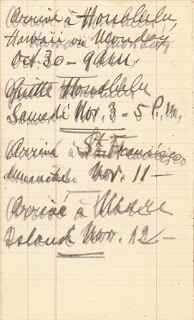 Nothing in these pages was difficult to translate, not only because a lot was written in English.  These entries are almost entirely a list of locations and when Jean arrived and left.  He appears to have become fluent in "franglais", that mish-mash of French and English.  He goes back and forth between the two languages and sometimes uses both in the same entry.  I took a small amount of liberty with the translations by making the format consistent for each entry:  date, then location, then day and/or time if included.

In this part of Jean's travelogue, I think the item that caught my attention the most was his three-month stay in the hospital at Mare Island, from April 7–July 8, 1902.  After all of his travels up and down the Pacific coast, he comes back to California and goes into the hospital.  Maybe it was a bug he picked up on the trip.  Obviously, another item that I hope shows up in his service file.

I'm guessing that the entry for October 20, 1903 — "Quartermaster Sgt" — means he was working in that position.  He tends to write little about his accomplishments.  I am pretty sure that Yerba Buena refers to the island in the middle of San Francisco Bay, which currently is a U.S. Coast Guard installation.  The Wikipedia page about Yerba Buena does mention that a U.S. Navy training station was established there before the turn of the 20th century.

Several of the locations Jean mentions I had not heard of previously.  I now know, however, that Pichilingue Bay (with some spelling variation) is in Baja California, as is Magdalena Bay. I guessed correctly that Cavite, Olongapo, and Mariveles are in the Philippines because of their apparent proximity to Manila based on Jean's notes.

There are additional significant gaps in time in these pages.  Between November 1902 and February 1905, Jean made only one entry, the one that says "Quartermaster Sgt."  And it seems that Jean had nothing to write about during his stay in Olongapo.  He arrived on March 6, 1905, and the next entry records his departure on May 19, 1906.  I wonder if that means he had a quiet tour there.

From May 19, 1906 through the last page shown here, the entries were written first in pencil and later copied over in ink.  I wonder if Jean was the person who wrote over the entries to make them darker, or if that was the work of Emma.
Posted by Janice M. Sellers at 10:42 PM