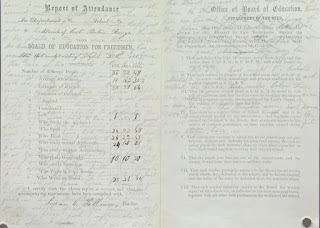 When I posted the drawings of the twelve students from the 1864 school for freedmen in Baton Rouge , I said I was working on transcribing the narrative that the teacher, Susan Carhart Tallman, wrote over a school form.  I had several deadlines pop up over the weekend, but I made time to finish the transcription tonight.  I was able to read most of the handwriting, but four words have continued to elude me, and I'm unsure of a few others.  If anyone can figure out what the missing words are, or if you think I've made a mistake somewhere, please post and let me know.  I will be happy to update the transcription as necessary.

I think I captured all the close-ups shown in the segment.  Normally I make graphics smaller for my blog, so posts will load more quickly, but I've left these images as large as possible, to help facilitate legibility. 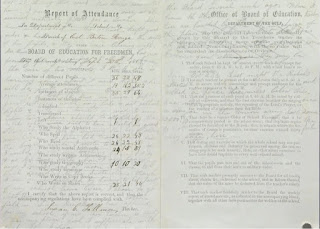 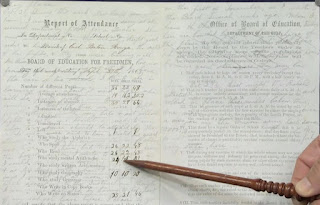 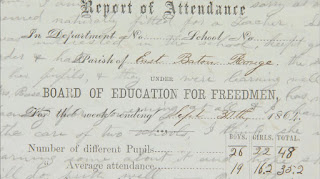 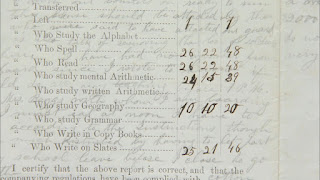 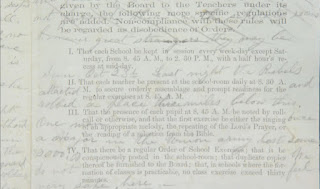 Here's my transcription.  I did both Tallman's narrative and the form itself.  I figured I might as well do it all while I was working on it.

Oct 21, during this week Miss(?) Davis(?) was called home.  I was sorry as she seemed naturally fitted for a teacher.  She was interested in the school, kept good order + had the respect of her pupils, + they were learning well.  Mrs. Reese(?) has no faculty for [illegible] at all + I have the care of two schools.  I think she is learning some about it and hope she will do pretty well.  ——  On the evening of Oct 18, Tues. we were kept from returning until very late + sat without lights + with our bonnets on ready to run when the school should be attacted [sic] by the rebels who were said to have attacted [sic] our guard   There is also talk of removing the last(?) of soldiers now here.  I have had no answer from the board since I wrote to [illegible] if I could do any teaching before 1 P.M. + as Mrs. Boggs with whom I am boarding says I must eat at noon I have to teach according to the instructions though I am much disturbed by having to let part of my school leave before I close to go into the cotton field.  ——  Since Mrs. Boggs has applied for my school, if no other(?) teacher is sent, [illegible] I suffer she will teach after I close(?), which I expect to do

on the first of November, as I wrote to the Board several weeks ago.  When I leave, the teachers here are boarded(?) by the Lt. in charge of the place + [illegible] him, but he does not furnish them with separate room however great strangers they may be.  [In the narrative, Tallman had crossed out with Xes this section I have marked with strikethrough.]

Sun. Oct 23d Last night the Rebels attacted [sic] and robbed a place three miles below this.  One man once a Major in the Union army lost some 2000.00  We do not feel very safe, here. —

Report of Attendance
In Department No ……..… School No …………
Parish of East Baton Rouge.

UNDER
BOARD OF EDUCATION FOR FREEDMEN,
For the week ending Sept. 30th, 1864.

I certify that the above report is correct, and that the accompanying regulations have been complied with.
Susan G. Tallman, Teacher

Board of Education rules:

Office of Board of Education
DEPARTMENT OF THE GULF.

To the general instructions personally given by the Board to the Teachers under its charge, the following more specific regulations are added.  Non-compliance with these rules will be regarded as disobedience of Orders.

II.  That each teacher be present at the school-room daily at 8. 30 A. M. to secure orderly assemblage and prompt readiness for the regular exercises at 8. 45 A.M.

III.  That the presence of each pupil at 8. 45 A.M. be noted by roll-call or otherwise, and that the first exercise be either the singing of an appropriate melody, the repeating of the Lord’s Prayer, or the reading of a selection from the Bible.

IV.  That there be a regular Order of School Exercises; that it be conspicuously posted in the school-room; that duplicate copies thereof be furnished to the Board; that, in schools where the formation of classes is practicable, no class exercise exceed thirty minutes.

V.  That during any exercise in which the whole school may not participate, stillness and industry be preserved among the non-reciting pupils by such memory, slate, or other silent exercises as have been found requisite to every well ordered school.

VI.  That the pupils pass into and out of the school-room and the classes, to and from their seats in military order.

VII.  That each teacher promptly account to the Board for all books, slates, charts, &c., delivered to the school, and in failure thereof, that the value of the same be deducted from the teacher’s salary.

VIII.  That each teacher faithfully render to the Board the weekly report of attendance etc., as indicated in the accompanying blank, together with all other facts pertinent to the welfare of the school.

Something I hadn't picked up on while watching this, but that became clear to me while transcribing the document, was that even this early the school was under the auspices of the military.  The Board of Education was part of the Department of the Gulf, the students were to go everywhere in military order, and the person in charge of "the place" (the school, I believe) was a lieutenant.

One thing I'm wondering about is how Mrs. Tallman could have a partial student.  The average attendance for girls was 16.2.  I suppose it would make more sense if I knew what the average was computed from — daily attendance over the week, perhaps?
Posted by Janice M. Sellers at 3:46 PM