A Declaration of Intention — from Cuba

I have written before about the research I am doing on my Cuban cousins, the branch of my family that immigrated to Cuba from Eastern Europe before coming to the United States.  My presentation at the recent IAJGS International Conference on Jewish Genealogy was about my research.

Besides learning more about my cousins and adding to that part of my family tree, one of the goals I had set for myself was to obtain actual documents from Cuba about my relatives.  That turned out to be a much more difficult process than I had imagined, but so far I have two birth certificates, one marriage certificate, and something that seems to be the equivalent of a U.S. Declaration of Intention, the first step to naturalization.  This gave me some wonderful information about Max's life. 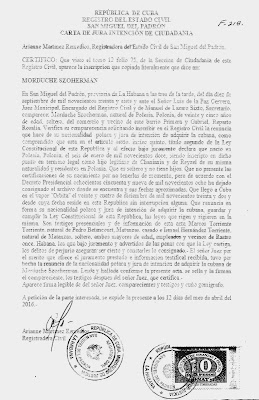 I certify that I saw Book 12, Page 75[?], of the Citizenship Section of Civil Registration; the record appears which is copied verbatim here and which states:

In San Miguel del Padrón, Havana province, at 3:00 p.m., on September 10, 1937, before His Honor Luis de la Paz Cervera, Municipal Judge, Head of Civil Registration, and Manuel de Lazaro Sixto, Secretary, appeares Morduche Szocherman, native of Polesie, Poland, 25 years old, single, businessman and resident of this neighborhood, First and Gabriel, Rosalia Division.  Verified his appearance asking to register in the Civil Registration his reununciation of Polish nationality and sworn intention of becoming a Cuban citizen, as described in the sixth article, fifth subsection, second heading of the Constitutional Law of this Republic, and under oath declares that he was born in Polesie, Poland on January 6, 1912, being legally recorded at that time as the legitimate son of Chaniania and Reyzel, of the same nationality and residents of Poland.  That he is single and has no children.  That he does not provide a birth certificate because he does not currently have it, but in accord with Presidential Directive 1859 of the year 1908 has written to the archive where it is located with the approximate dates.  That he arrived in Cuba on the steamship Orbita on December 24, 1932 and since that date has resided in the Republic with no interruption.  That he formally renounces his Polish citizenship and swears to his intention of becoming a Cuban citizen, to observe and comply with the Constitutional Law of this Republic, the laws that govern and governed the same.  Witnessing this information and this act are Marcos Torriente Torriente, native of Pedro Betancourt, Matanzas, married, and Ismael Hernández Torriente, native of Matanzas, single, both of legal age, employed and residents of 11 Rastro, Havana, which they swear to under oath and being warned of the penalties with which the Law punishes the crimes of perjury, swear it is correct.  His Honor the Judge, by merit of the oath and the information received from the witnesses, has accepted the renunciation of Polish citizenship and sworn intention to become a Cuban citizen from Morduche Szocherman.  Read and found to conform to the present act, sealed and signed by the petitioner and the witnesses after His Honor the Judge, who certifies.

Appears the legible signature of His Honor the Judge, the petitioner and witnesses, and stamp.

This has given me a lot of material to work with.  I knew Max's parents' names already, but I now have a birth date (which I may never be able to verify), his date of arrival in Cuba, the ship he traveled on, even which Havana neighborhood he was living in.  He must have known the witnesses; maybe they worked with or for him.  Plenty of new leads to follow!

I am disappointed, of course, that this is a typed transcription of the original and not a copy, but that's the way they do business in Cuba.  I'm still not sure whether they even have photocopiers there.
Posted by Janice M. Sellers at 11:59 PM