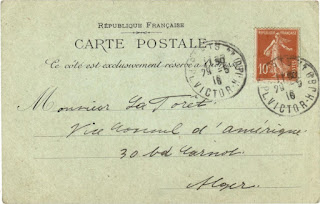 This is a postcard 5 1/2" x 3 1/2" in size.  The paper is a muted green on both sides.  It is a little worn but is in pretty good shape.  Both sides have some preprinted text and handwritten parts.  It has a 10 centime stamp from France (République Française) and is dated May 29, [19]18.  The postmark says Pl. Victor Hugo, but I can't read the city.  I suspect it is Paris, however, as the message side of the card has "(XVIe)" for the 16th Arondissement, the location of Place Victor Hugo in Paris. 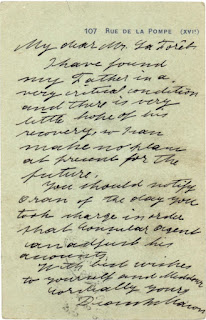 I have found my father in a very critical condition and there is very little hope of his recovery, so I can make no plan at present for the future.

You should notify Oran of the day you took charge in order that consular agent can adjust his accounts.

With best wishes to yourself and Middour [?]

Translation of address side of postcard:

This side reserved exclusively for address

This seems to be from someone associated with Jean La Forêt's position as Vice Consul, as he gives Jean instructions to communicate with the consular agent about when Jean took charge.  A few embassies are in the area of 107, rue de la Pompe today, so maybe this was where the American embassy was in 1918.

This document on the Algerian U.S. embassy site says that from 1913–1925 the Consulate was located "in a seafront building behind the main Post Office at 30, boulevard Carnot."  Boulevard Carnot in Algiers is now Avenue Taleb Messaoud, according to Google Maps.  Oran most likely refers to the city in Algeria.  But why is the consular agent in Oran if the Consul is in Algiers?  Was the embassy in Oran?

The bulk of the note, however, is about this man's father, whom Jean appears to know.  The father's name is not given, and the name of the writer is difficult to read ("Dionn" was the best I could do, but I don't really think it's correct), so I can't do much to figure out who either man was.  I also don't know who "Middour" was (which I suspect is also misspelled).

Overall, this postcard leaves me with more questions than answers!
Posted by Janice M. Sellers at 11:01 PM