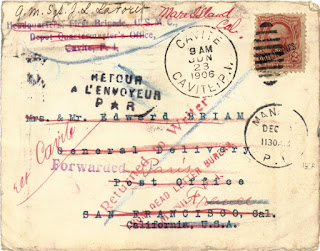 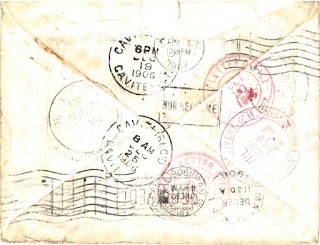 We're going to take a step back in time — otherwise known as I just discovered that I have earlier documents relating to Jean La Forêt that were hiding in the folder, probably because they're smaller items.  So I have rearranged everything in what I hope is now chronological order again. 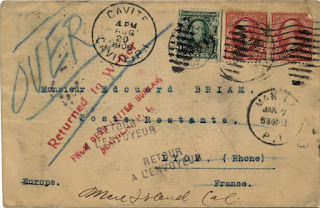 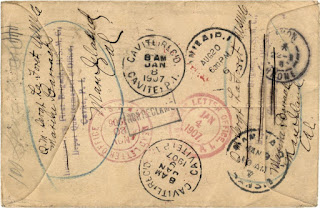 These are two empty envelopes that are covered with postmarks on front and back.  I cannot read them all clearly, so I'm not sure I can trace the complete path of either envelope.

The first envelope is dirty white and is 5 1/4" x 4".  The original postmark seems to be June 23, 1906, when Jean mailed it from Cavite, Philippines.  His return address at the time was Headquarters, First Brigade, USMC, Depot Quartermaster's Office, Cavite.  The envelope was addressed to Mrs. and Mr. Edward Briam, General Delivery, Post Office, San Francisco, California, U.S.A.  The cost of postage was 2c.

The second envelope is a muddy buff and measures 5 7/8" x 3 1/2".  It was originally mailed on August 20, 1906, from the same address.  This envelope was addressed to Monsieur Edouard Briam, Poste Restante, Lyon, (Rhone), France. Europe.  Postage for this letter cost 5c.

Trying to follow the travels of the first letter, it has a second postmark on the front from December in Manila.  It indicates it was forwarded to Paris, France at some point.  It also has "Retour a l'envoyeur par" (Return to Sender), "ret Cavite", "Returned to Writer", and "From Dead Letter Bureau / Manila P. I."  At the top, in red, "Mare Island Cal." is written and the original return address in Cavite has been crossed through.

So my best guess is that after Jean mailed this letter from Cavite to Edward Briam in San Francisco on June 23, 1906, it transited another post office in July, then arrived in San Francisco at the General Delivery office on July 28.  From there it acquired another San Francisco postmark on July 30, perhaps on its way out of the city to the forwarded address in Paris.  It was not claimed there by Briam.  On October 20 it was postmarked in a Dead Letter Office in the United States, then went to a second Dead Letter Office, which sent it out on December 13.  This is probably when it wended its way back to the Philippines.  It was postmarked in Cavite once on December 19 and then again on December 25, which I think came before the December 25 postmark in Manila.  The Manila postmark on the back has "1130 A", as does the second postmark on the front, although I don't understand why it needed to be franked on both sides.  The final postmark, February 7, 1907, would seem to be when the poor letter finally made its way back to Jean, who had transferred to Mare Island from Cavite.  This also matches the information from Jean's journal, where he wrote that he was in Mare Island from November 1906 to December 1907.

Sometime between when Jean wrote the first letter in June and the second letter in August, he apparently learned that Mr. Briam had moved from San Francisco, and so the second letter was mailed to France.  It has a second postmark on the front, January 7, presumably 1907, from Manila.  It also has markings of "OVER", "Returned to Writer",  "From Dead Letter Bureau / Manila P. I.", "Retour a l'Envoyeur" twice, and "Mare Island Cal."

This letter didn't have as many postmarks because it didn't take a detour through San Francisco before it went to France.  Otherwise its travels were similar to the first letter's.  Jean mailed it on August 20, 1906 to his friend, whom he thought was in Lyon, France.  It went through Manila on the same day, then arrived in a Rhone post office on August 22.  As with the first letter, it was not claimed.  It went to a U.S. Dead Letter office, which postmarked it on November 20.  From there it traveled back to the Philippines, where it was received January 4, 1907.  It went back to Cavite on January 8, was sent back to Manila on January 9, and probably that same day was routed to Jean in Mare Island, although this envelope does not have a postmark indicating when it was received in California.

Even more impressive than these letters' international travels, at least in my mind, is the fact that Jean kept the envelopes.  Both envelopes are empty, so the letters themselves might have eventually made it to Edward Briam.  But why did Jean consider the empty envelopes important enough to keep?  He not only kept them, he had them in their own envelope: 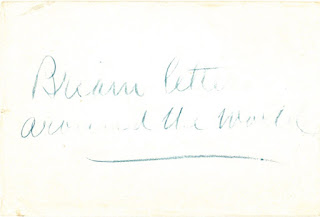 This envelope is off-white and measures 6" x 4".  I realize the handwriting didn't scan well, because the words are written in blue pencil:  "Briam letters around the world."  Maybe Jean and Mr. Briam laughed about the letters following Jean back to California.

Briam is not mentioned anywhere in Jean's journal:  no stories about him, not included in the birthday list, no address or other notes about him.  How could Briam be so important that Jean kept these envelopes, yet this is the only memento of him?

An interesting side note that occurred to me is that Jean mailed the first letter in June 1906, only two months after the earthquake and fire in San Francisco.  I wonder if the quake is the reason Mr. Briam was no longer living in San Francisco?
Posted by Janice M. Sellers at 9:30 PM