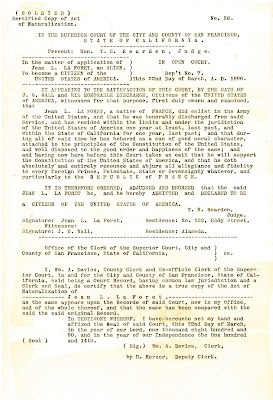 This sheet of paper is 8 1/2" x 13", which seems an odd size to me.  Maybe that was the standard for legal in 1890?  It is off-white and about 20# bond weight.  Everything on it is typewritten in clear black ink; this appears to be an original typed document, as I can feel the impression of some of the letters and punctuation on the reverse.  The page has no handwriting, seal, or anything beyond the typing.  There is no watermark.  It has three fold marks; when I received it, it was folded and in an envelope (see below).

I thought I had arranged all my "treasure chest" documents in chronological order, but I messed up with this.  It is a transcription of Jean La Forêt's 1890 naturalization in San Francisco Superior Court, which definitely predates his 1908 marriage to Emma.  It's nice that this copy is here, because otherwise there probably would be nothing to get, as most naturalization documents from San Francisco dating from before 1906 were destroyed in the fire after the Great Earthquake.

Jean was naturalized on March 22, 1890, which matches exactly the date that Emma put on her emergency passport application in 1917.  This page is not dated, however, so I don't know when it was typed.  I didn't find any misspelled words in the transcription, so someone seems to have done a good job.

Now that I have verified Jean's naturalization date, it's interesting to see where it fits into his timeline.  From the third section of his journal that I posted, he left the U.S. Army on August 11, 1889.  He naturalized the next year and was actually living in San Francisco — we finally have an address for him there, 123 Eddy Street.  (California Grocery is now at that address.  It's a few blocks from Powell Street BART station; guess where I'm going the next time I'm in San Francisco?)  Five months after his naturalization, he enlisted in the Marines (the first time).  The fact that he was already a citizen when he joined the Marines makes me think even more that he must have missed military life.

Jean apparently applied for citizenship through some sort of special provision for soldiers, because the document starts out with "( S O L D I E R )" at the top, and his two witnesses were one person and his honorable discharge.  As his naturalization was effected 16 years before the process came under federal laws and was regularized, it would have been under whatever laws San Francisco had at the time.  I'll have to figure out where to look for those.

The witness for Jean's naturalization was J. G. Wall of Alameda.  That name has not appeared in any other documents related to Jean.  I'm pretty sure it must have been a man, because I don't think a woman would have been allowed as a witness for a naturalization in 1890.  A quick search in city directories gave me Joseph G. Wall living in Oakland from 1889–1892, so the Alameda cited as his residence may have referred to the county.

And this is the envelope which held the naturalization document.  The first words on it make perfect sense:  "Naturalization paper."  But then it has "Décès d'Elizabeth Curdt", which means "Death of Elizabeth Curdt."  So maybe at some point Elizabeth Curdt's death certificate was kept in the same envelope?  If so, it wasn't there by the time I received it.
Posted by Janice M. Sellers at 10:49 PM