She Was the Informant for Her Own Death Certificate 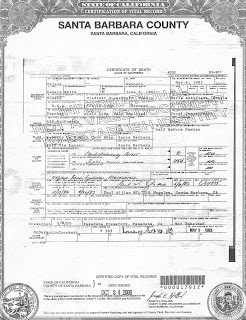 It's October, the month of Hallowe'en and strange and scary things, so Elizabeth O'Neal of the Genealogy Blog Party asked people to write about the strangest things they had found during their research.  Besides my grandfather being registered as a girl on his birth record (which is strange in the sense of odd and confusing, but not particularly scary), the strangest thing I have found is the death certificate where the information was provided by the deceased herself.

I ordered this certificate while I was doing research for a friend.  As I worked my way down the page — past name (Taisia Swanson), birthplace (Russia), parents' names (Vladimir Gussakosky and Maria Akinfieva), occupation (self-employed vocal instructor), and usual residence (Ojai) — I reached the box labeled "Name and Address of Informant–Relationship", and found "Self Before Demise."

Say what?  This was the first time I had seen that on a death certificate.  Why in the world would she have given the information for her death ceratificate before she died?

My eyes had gone straight from the usual residence to the informant.  When I looked at the other information, I found that she had died in a convalescent hospital.  So she didn't really give the info specifically for the certificate; she likely provided it while she was filling in the intake forms that the hospital required, and the person at the hospital copied it from there.  But it certainly was startling to read, and I've never seen another like it!
Posted by Janice M. Sellers at 6:07 PM