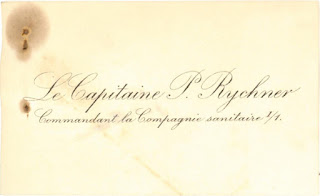 This is a business card (or possibly a calling card) for Le Capitaine (Captain) P. Rychner.  It is 3 7/8" x 2 3/8" and is yellowed with age but might have been white or off-white originally.  It has a large brown spot in the upper left corner, along with two dark holes, one near the bottom of the brown spot and one about 3/4" below the first.  This business card is one of four items that were held together with a straight pin which rusted over time.  I removed the straight pin but have kept the four items together.  Captain Rychner's card also includes his position, Commandant la Compagnie sanitaire I/1, which means Commander of the Health (Medical?) Company I/1.  I don't know how to interpret the I/1. 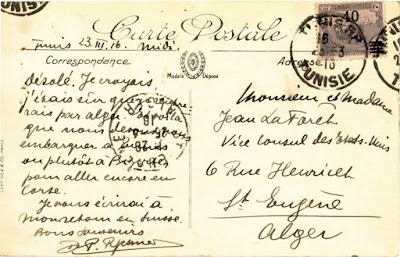 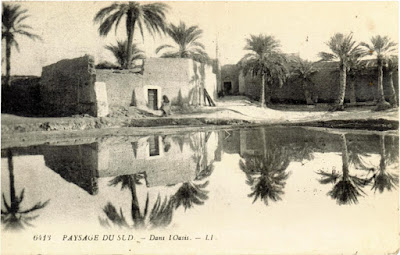 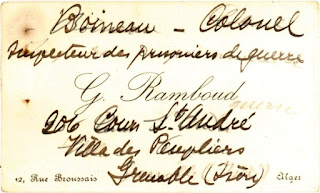 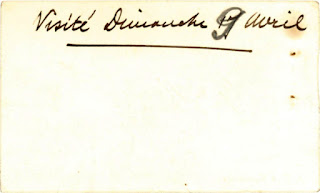 All three of the above items have two holes from the straight pin that held everything together.

And next are the transcriptions and translations of the French texts.

(I really wish there wasn't a postmark right over the message.  It made it much more difficult to read!)

Sorry.  I beleived, I was sure that I would be returning to Algiers.  And now we have to board in Tunis or rather Bizerte to go again to Corsica.

I will write to you on my return to Switzerland.

Sunday, April 9 — Received visit from Police Colonel Boineau (POW Inspector).  He told me that you met in Tunisia, where you had the chance to help him pull[?] [something] from the sand.

So this is an interesting collection of items.  Rychner's business card is logically connected with the postcard, as it appears to be Rychner who sent the latter.  The only thing that connects those two items with the note and Ramboud's business card is the fact that I received them pinned together.  The note does mention Tunisia, however, and Rychner was in Tunisia when he wrote the postcard in March.

One important question here is who wrote the note on the torn paper and the note on Ramboud's business card.  If it was Rychner, then Jean was in Tunisia at some point and met Colonel Boineau there.  It makes sense that Rychner wrote these notes, because he would have sent them to Jean, and that's why they were kept together.  If Jean wrote them, then logically he would have sent them to Rychner (or whomever), and then he shouldn't have had them anymore.

Another question is just who G. Ramboud is, other than someone in Algiers.  The only part he appears to play here is to have his card be a piece of scrap paper on which to write a note.  None of the information here connects him with Rychner, Boineau, or Jean.

Was Boineau the person whose address was in Grenoble?  Or was it Rychner, who wrote on the postcard that he would write again on his return to Switzerland?  Did he send the note and Ramboud's card from Switzerland?

The note on the front of Ramboud's business card was written originally in pencil and then copied over in ink.  I noticed that the lines doesn't all match up well.  It might be that the pencil was written by Rychner and copied in ink by Jean.  Whoever wrote over the pencil in ink missed the word "guerre" to the right and below the name Ramboud on the card.