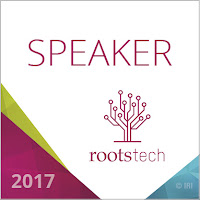 I am really surprised how quickly time has passed since RootsTech ended.  I planned to post about it right after the conference, but somehow a week and a half has slipped by while I've been catching up to my regular life.

This year's experience was quite a bit different from when I attended two yeas ago.  That year the FGS conference was held in conjunction with RootsTech, which worked out well for me, because three quarters of the sessions I attended were FGS ones.  I found the vast majority of the RootsTech sessions so basic that I didn't feel I would learn anything from them.

Being a speaker this year was the biggest difference, of course.  I had to pay much more attention to the time on the two days of my talks!  (I'm glad both were in the afternoon, as I'm not much of a morning person anymore.)  I'm happy to report that both talks went well, with good questions from attendees and many thank yous for the helpful information.  I was even interviewed about my classes for the RootsTech Facebook page!

One negative aspect of the conference was like "déjà vu all over again."  My talks (on Freedmen's Bureau and Freedman's Bank records), along with almost all other presentations that were part of the Africa-focused research that was heavily promoted this year, were in the very, very, very far end of the Salt Palace, closer to the Family History Library than to the main hub of activity for the conference.  (This is where the FGS talks were in 2015.  I joked then about FGS being the red-headed stepchild.)  That meant that none of the talks (that I know of) had as good attendance as they should have.  It isn't as though there aren't appropriately sized rooms closer to the main hall that could have accommodated our sessions.  And I'm not the only person who has commented.  One has to wonder why FamilySearch would market African Heritage Day so much and then put the classes that supported it so out of the way.

Another thing that was (happily) different this year was that several RootsTech sessions were actually geared for intermediate and more experienced researchers.  I found quite a few presentations to attend and learned a fair amount.  By far my favorite speaker during the conference was Myko Clelland of FindMyPast.com.  I missed his first talk — on the British Newspaper Archive collection on FMP — but I did attend his talks on British crime and punishment records and on British research beyond the census.  He was knowledgeable, entertaining, and a great presenter.  I never did figure out what he thinks is so difficult to pronounce about his name, however.

Another standout session, primarily because of my own presentation on the same subject, was the talk by FamilySearch's Ken Nelson on Freedmen's Bureau records.  He was the coordinator of the Freedmen's Bureau digitization and indexing project for FamilySearch, and he explained how he assessed the records and decided which ones would be prioritized for the project.  This helped me understand what is and is not indexed and why, and I've been able to share the information with others.

I also learned a lot in Bernice Bennett's session on the Southern Claims Commission.  Hers was the best talk I have heard on this subject.  I feel much more comfortable now with beginning my research into these records.

Unfortunately, not everything was good.  Besides the "afterthought" location of the black genealogy programming, one major bone I had to pick with the conference was the decision to make handouts available only via the app.  I don't have a smartphone, which meant I didn't get to have handouts.  And the handouts for my sessions weren't even available through the app when I taught my first class!  I guess this is RootsTech's way of saying that if you don't have a smartphone, they don't want you to bother coming to the conference; you are not their target market.  The only place I could find information about this policy was buried near the bottom of the FAQ online, though I freely admit I may have missed it somewhere else.  Personally, I think this is shortsighted of FamilySearch, but my opinion carries no weight.

And not all classes were as good as Myko Clelland's.  I think the worst I went to was one by a prominent British genealogist who claims to be "the best genealogist in the UK."  That person's session covering what was supposed to be "unique" and "unusual" records spent half the time rehashing records that are basics of research and are known to most researchers.  A lot of ego but not much substance.  Another woman in that session and I had a running commentary during the talk, as one common record after another was discussed in great detail.  (That attendee is a missionary working at the Church History Library; she has an ongoing project to identify and find detailed information on all the members of the Mormon Battalion.  There was so little of substance in the presentation that she worked on her own research during the entire talk.)

My other big beef with the conference is the large number of sessions presented by company employees that weren't always clearly noted as such.  I think every talk that is essentially advertising for a company's site and/or services should be marked as "vendor session" in the program.  Then at least you know what you're in for.

I was so busy at the conference, I had hardly any time for the Family History Library.  I did get over there for a few hours to work on my Mundy research, in my search for my grandfather's biological father.  I didn't make huge progress, but every little bit helps.

Notwithstanding the problems I experienced at the conference, overall I had a great time, and I'm very happy I was able to attend.  I hope my talks were reviewed well by attendees, and maybe I'll have presentations accepted next year on my own merits.
Posted by Janice M. Sellers at 11:37 PM