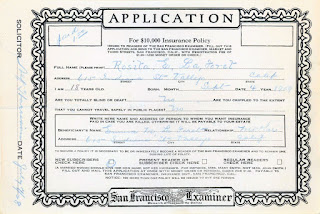 This is a 9" x 6" off-white piece of paper.  It is a carbon copy of an application for a $10,000 insurance policy for Rosita La Forêt.  The policy cost $1.00, indicated as paid.  Rosita was 18 years old and still living at 615 Indiana Street, Vallejo, California.  Her birth date was given as September 4, 1909, which matches that on the emergency passport application her mother filled out in 1917.  The application included questions asking whether Rosita was totally blind or deaf (no), or crippled to the extent that she could not travel safely in public places (no).

The application was dated July 7, 1928.  This time the only beneficiary named was Rosita's mother, Emma La Forêt.  Jean La Forêt had died shortly after the date of the insurance policy I posted last week.

Now that this has surfaced, one item that Emma saved makes a little more sense.  On July 17, 1928, Emma bought a subscription to the San Francisco Examiner.  When I posted about that, I wondered why she would have bothered to keep such an apparently inconsequential item.  Even though this insurance policy was available to readers of the Examiner, as was last week's policy through the Chronicle, the fact that the subscription and the policy are dated on the same day may mean that Emma had simply kept the paperwork together. 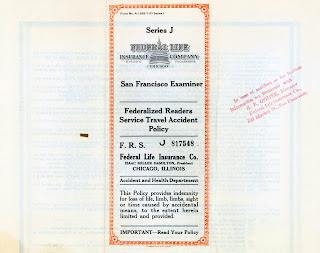 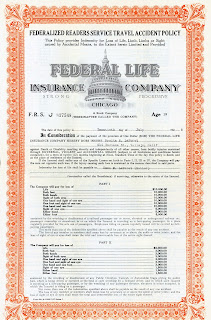 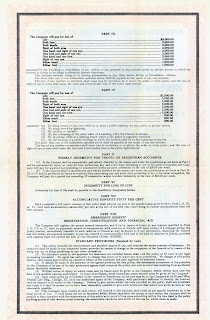 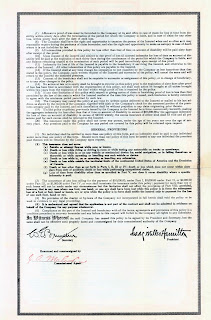 The insurance policy itself is similar to that in last week's post.  It is again 22" x 17", designed to be folded into quarters and then thirds.  The scan is close to the paper's true colors, an off-white with some color on it.  It is labeled as a "Federalized Readers Service Travel Accident Policy."

Almost everything on this policy is preprinted.  The exceptions are the stamped contact information on the front in red; and the date, Rosita's name, age, and address, and Emma's name as beneficiary on the "title" page.  On this policy the signatures on the the third page appear to have been printed with the policy, not stamped on it later.

As with last week's insurance policy, no specific reason or travel is indicated, so we don't know why Rosita was being insured.  The details about compensation are similar to those in the previous policy.  Payment amounts are higher than those from 1926 — $10,000 and $5,000, as opposed to $7,000 and $3,500 — at least for the first classification of injuries.  This policy has four different levels, however.  The distinctions are based on how the injuries were sustained.  The lowest payments went down to $1,000 and $500.  So if Rosita had been injured during the "wrecking or disablement of a railroad passenger car" while she was traveling on it as a "fare-paying passenger", she would have been eligible for the highest category.  On the other hand, an injury via lightning, cyclone, or tornado fell into the lowest category.

This policy was from the Federal Life Insurance Company of Chicago.  The company is still in business today, unlike good old Eureka Casualty Company from last week, although it is now in Riverwoods, Illinois. 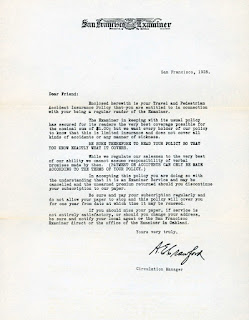 The policy also came with a formulaic acknowledgment letter.  It is on an 8 1/2" x 11" off-white piece of paper, about 20# bond in weight, with no watermark.  It was printed.  The signature has some texture and is significantly darker than the typed letter; it might be real.  The letter was not glued into the policy but was loose.

This is another fairly standard letter, but the Examiner doesn't seem to have entirely trusted its salesmen.  Why else would it be necessary to include the disclaimer that it could not "assume responsibility of verbal promises made by them"?

There's a slight conflict in some of the information in the letter.  The first paragraph states that a regular reader was entitled to a policy, and the application form includes readers as a category, but the next-to-last paragraph has "Be sure and pay your subscription regularly and do not allow your paper to stop and this policy will cover you for one year . . . ."  Maybe that was just a marketing tactic to try to keep subscribers?
Posted by Janice M. Sellers at 10:42 PM