Treasure Chest Thursday: Another Insurance Policy, Another Trip for Rosita? 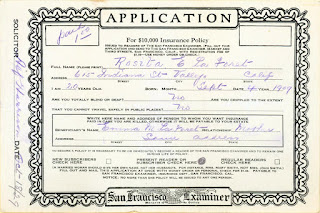 This 9" x 6" piece of off-white paper is a carbon copy of another insurance policy for Rosita E. La Foret.  As with last week's policy, the cost was $1.00, noted as paid in the upper left corner.  The date on the form is October 18, 1929, and Rosita was 20 years old.  Her birthdate is noted as September 4, 1909, and she again responded "no" to the questions asking whether she was totally blind or deaf, or crippled to the extent she could not travel safely in public places.

This form indicates that Rosita was a present reader or subscriber of the San Francisco Examiner, whereas the previous year she had been a new subscriber.  The "solicitor" (salesman, I presume) who sold the policy was Alf Harrison. 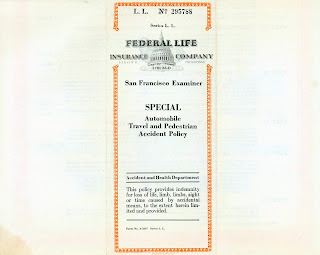 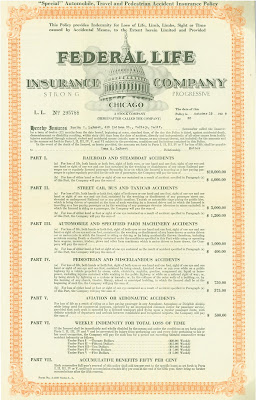 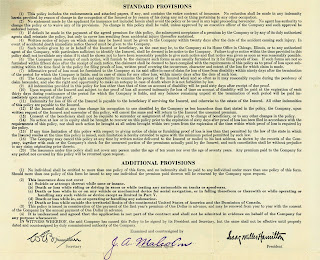 The insurance policy paper, while similar to that from last week, is not as detailed.  It is only 11 7/8" x 18 3/4", about half the size of the previous two policies, so designed to be folded in half and then thirds.  It varies between off-white and yellowish and has some greasy-looking stains.  This is a "SPECIAL Automobile Travel and Pedestrian Accident Policy."  I wonder how "special" differs from "federalized."

Again, almost everything on this policy is preprinted, including the signatures on the back page.  The date; Rosita's name, age, and address; and Emma's name and relationship as beneficiary are typed.  This policy doesn't even have the added contact information that last week's example did.

The compensation amounts in this policy don't have as much detail or variety as those in the 1928 policy, and the payment amounts have generally decreased.  Now there are six categories of injuries, with the top payments being $10,000 and $4,000 (instead of 1928's $5,000 for the lower payment).  These were for an injury in a railroad or steamboat accident.  The lowest payments, $750 and $375 (down in amount from $1,000 and $500 in 1928), were for injuries during a pedestrian or miscellaneous accident.

This is another policy from the Federal Life Insurance Company of Chicago, so the Examiner had not changed its affiliation during the past year. 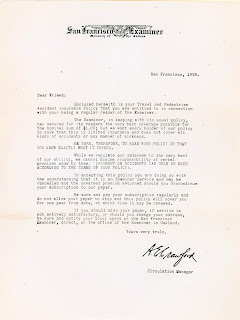 The policy came with the standard acknowedgment letter, on an 8 1/2" x 11" off-white piece of paper, about 20# bond in weight, no watermark.  It is word for word exactly the same as that from 1928; even the sentence lengths are the same.  It's the same letter.  The only difference is the year in the upper right of the page.  Even the signature of the circulation manager looks the same, but this one has no texture and appears to have been printed.  Since it looks exactly the same as the one from 1928, I now suspect the earlier one was probably printed; I don't know where the texture came from.

Because this is the same letter, the Examiner still doesn't trust its salesman.  There's also the same conflicting information about being able to hold a policy as a reader but the admonition to keep one's subscription paid up.

This policy was written on October 19, 1929.  Less than a week later, on October 24, came the Stock Market Crash of 1929, which marked the beginning of the Great Depression in the United States.  I wonder how much the policy was worth at that point?  At least the company survived.

Surprisingly, this is the last document I have for Emma.  The only items pertaining strictly to her were three insurance policies.  Now I have to decide who to look at next.  Yes, I still have lots of documents left!
Posted by Janice M. Sellers at 9:56 PM