Saturday Night Genealogy Fun: Who is Your "Bad Behavior" Relative? 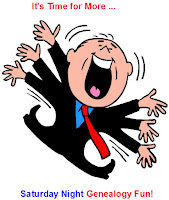 Genealogy isn't all sweetness and light.  This week Randy Seaver's challenge for Saturday Night Genealogy Fun is to think about the less pleasant members of our family (maybe not as much fun as usual?):

Here is your assignment if you choose to play along (cue the Mission:  Impossible music): (1)  Who is one of your relatives (ancestor or not) who behaved poorly during his or her life?   It can be any time period.

I guess I've been pretty fortunate.  So far I have not found many members of my family who behaved poorly, or if they did, I haven't found the evidence yet.  When Randy posted this theme a year and a half ago, I wrote about the really bad relative I know of, Joseph Mulliner, who was hung for treason after the Revolutionary War.  It's hard to behave more badly than treason.

I suppose my fugitive great-grandfather, the biological father of my paternal grandfather, might quality as a "bad behavior" relative.  Until I figure out who he is, however, and then try to determine whether he even knew that my great-grandmother was pregnant, I can't indict him for not being around.  That wouldn't be fair.

If I focus on "bad behavior" rather than criminal acts (such as treason), one person does come to mind.  I can't really name names, as descendants are still alive, but I can describe her behavior.

I never met my grand-aunt, who died in 1980, but I heard stories about her when I was young.  Her daughter was unable to bear children of her own, so she and her husband adopted a son.  My grand-aunt always made a pointed distinction between how she treated her adoptive grandson versus the biological grandchildren she had.  Decades later, when I met the grandson, he confirmed the stories I had heard.  It was obvious the pain still lingered.

The daughter mentioned above later had cancer.  Even though she was ill and nearing the end of her life, my grand-aunt used to order her around and demand that the daughter cook for her.

I was fortunate to meet my grand-aunt's son on a trip to New York.  He did not go into detail, but he did confirm that the woman was unpleasant to pretty much everyone and treated people poorly.  He apparently had nothing good to say about her so kept what he said to a minimum.

I don't know how she treated her father, but his will shows that he wasn't a big fan either.  Bequests to his other children were each several hundred dollars, while he left her only $25.  At the end of the will, after having designated several bequests to charitable organizations and the like, he stated that the residue of his estate was to be divided evenly among all of his children — except for this grand-aunt.

Overall, there seems to have been a lifetime of "bad behavior."  If she had any positive traits, no one seems to have remembered them to pass on that information.
Posted by Janice M. Sellers at 11:25 PM