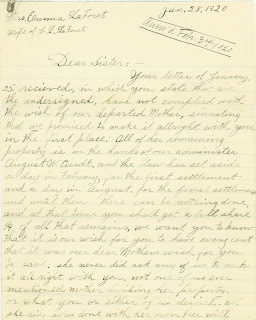 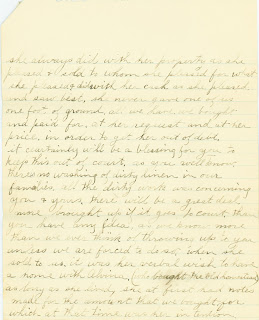 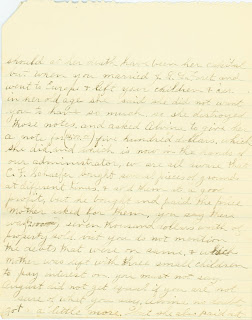 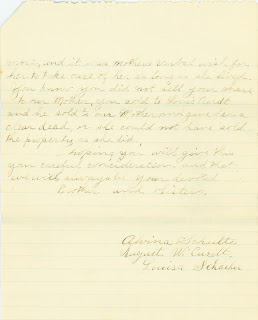 These four sheets of lined paper measure 7 13/16" x 9 13/16".  They appear to be inexpensive and of low quality, with no watermark.  Although the paper is lined on both sides, the writing is on only one side of each page.  Unlike so many items in this collection that have been glued together, these pages are attached by an ingenious metal brad.  The pages have three fold lines; it looks as though they were folded in thirds to fit into a business-sized envelope, and then one end was folded over to fit into a shorter envelope.

This is a four-page letter, all handwritten, dated January 28, 1920.  It is from Emma (Schafer) La Forêt's three siblings — Alvina (Curdt) Schulte, August W. Curdt, and Louisa (Curdt) Schaefer — and was written to Emma in response to the letter dated January 25, 1920 that she sent to them (which I posted last week).

If you don't want to read the handwriting, don't worry — look at this. 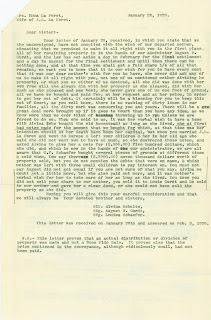 Yes, conveniently, I also have a typed transcription of the letter.  It is not exact — several capital letters were made lower case, a few letters went the opposite direction, spelling was changed, ampersands were converted to spelled words, and punctuation (which is very casual in the original) was adjusted.  In addition, two entire phrases were omitted.  But it's a little easier to read than the handwriting.  This particular page is 20# watermarked bond (BERKSHIRE SOUVENIR BOND USA), 8 1/2" x 13", and cream in color.  If that sounds familiar, it should.  It's the same type of paper as used in the typed copy of Emma's letter to her siblings.  In fact, this is attached to those two pages.

The differences between the original handwritten letter and the typed transcription are:

In addition, the transcribed letter has two notes at the bottom not from the original:  when it was received and answered, and a comment that the letter proves distribution of property was accomplished, not a sale.

In this letter we finally hear something from Emma's siblings, giving us a new perspective on some of the goings-on in the family.  Something that particularly caught my attention were the two comments about Emma having left her children in the care of her mother:

"when you married J. L. La Foret and went to Europe & left your children & her in her old age"

"but you do not mention the debts that were on same, & which Mother was left with three small children to pay interest on"

(Although the grammar in the letter is very fractured, it's usually easy enough to figure out the meaning, so I am going to assume that the interest mentioned in the second comment was being paid on the debts, not the children.)

I admit, I have wondered why Emma did not bring her children from her first marriage with her when she married Jean La Forêt and went to Europe.  But the siblings' accusations do not ring true.

First of all, when Emma left Missouri to marry Jean in 1908, the children were not that small.  Camilla Petit was born in 1894, making her 14, and Eugene in 1896, making him 12.  Marie was the oldest.  Emma did not give her birth date on any documents I have, but Jean wrote in his diary that she was born in 1885.  So she was an adult in 1908.  In fact, she apparently was married that year, because I found Marie in the 1910 census, married to William Schulte (as Emma stated in her narrative).  The census says that they had been married for two years.  And Camilla and Eugene are living with them, not with their grandmother.  (As an aside, the census shows that Marie was born in Germany; given how friendly Emma's in-laws were toward her, I'm sure that they were even more excited to have a baby in the house.)  While I have no documents that indicate how long Camilla and Eugene had been living with their older sister, it is not unreasonable to think they had been doing so since Emma had departed.

Once I call the complaint about Emma dumping her children on her mother into question, the siblings don't have much ammunition left.  So even though they wrote that Emma was the person who should dread the family's dirty linen being aired in court, I'm still inclined to think that the siblings were probably in the wrong and deliberately deprived Emma of at least some of her rightful inheritance.

I have one more item to include in this post:

Both the original letter from the Curdt siblings and the three glued-together typed pages with the transcriptions were in this envelope.  One of the copies of the waiver signed by Louis Curdt was in it also.  What was not in it was a copy of the response to the Curdt siblings letter dated January 28, which was sent on February 3, according to the note at the bottom of the transcription.
Posted by Janice M. Sellers at 11:57 PM