Ten Things You Should Always Carry with You 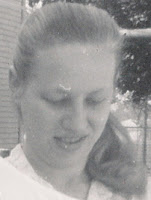 Today is January 7, which on the Jewish calendar this year (5779) is 1 Shevat, my mother's yahrzeit, commemorating the date of her death.  (Technically I'm writing this on 2 Shevat, as it is after sundown, but it's the first time I've had a chance to sit down and write all day.)  For a couple of years now I have written about my mother on her yahrzeit as part of my effort to record and share stories about her.

I think it was around the time I started college that my mother told me about the "ten things you should always carry with you."  These were the basics that she felt you needed to have on you wherever you went.  I vaguely recall her saying that someone had taught her the list when she was yonger, maybe when she started dating.

So what are the ten things, you ask?  They are:

And I'm so disappointed that's all I can remember now!  Did anyone else's mother teach them this?  I'm hoping someone can fill in the blanks for me.  I really did have this memorized at one time.

Of course, my mother's list looks somewhat dated now.  A dime for a phone?  It's difficult to find pay phones anymore, and when you do, they certainly don't cost a dime.  Besides, mobile phones are now ubiquitous.  Not as many people smoke nowadays, so a lot of people wouldn't be carrying the cigarettes and lighter.

If I were to redo her list based on what I actually carry around, it would be:

And that's about it, at least based on the parts of her list I can remember.

I was looking at a vintage compact at a store recently and realized that's what it should be instead of a mirror on the list.

Aha!  I think I remembered another item:  sunglasses.  And it had to be sunglasses, not regular glasses, because my mother didn't wear prescription glasses.

I'm almost there!  The current version of the list:

Now I'm missing only one item.  It's possible that my mother had house key and car key as individual items, but I don't think that's it.