I don't remember how I learned that I had a Revolutionary War ancestor, but I was of course interested to learn about his service.  Imagine my surprise when I discovered that Moses Mulliner was about 35 years old and had served as a drummer!  I have read that the Mulliners were Quakers, which could help explain why he was a drummer, as he might have wanted to participate but not fight or kill.  Once, however, when I was giving a presentation about Moses and his brother (who was a Loyalist), someone in the audience told me that the Mulliners were not Quakers, although he didn't explain his assertion.  I have not yet found documentation for or against the Mulliners as Quakers, so I don't know yet.  But I'm always looking for more information.

When Moses was quite old, and when the United States federal government made a provision in 1818 for infirm veterans to receive pensions, he applied for such a pension.  He eventually did receive it, after makiing a deposition and finding men from his unit (who were still alive!) who attested to his service.  He was approved for and received the pension, including back payments, shortly before he died in 1821.

Years ago I went to the National Archives and had photocopies made of Moses' pension file.  I couldn't find them easily now, but the file has been digitized and is available online, so I now have an electronic copy, which is much handier in many ways. 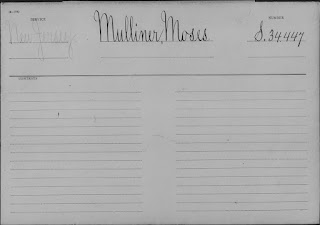 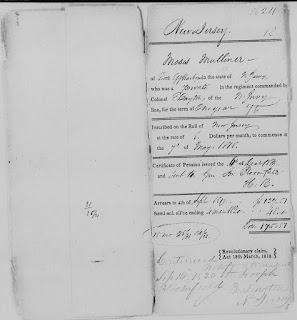 of  Little Egg Harbour  in the state of  N Jersey
who was a  private  in the regiment commanded by
Colonel  E Dayton,  of the  N. Jersey
line, for the term of  One year 76

Certificate of Pension issued the 6th of Decr 1819 .
and  Sent to Gen Jos. Bloomfield  . 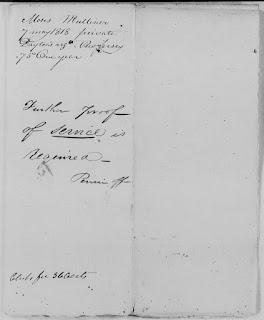 Further proof
of Service is
Required —
Pension off 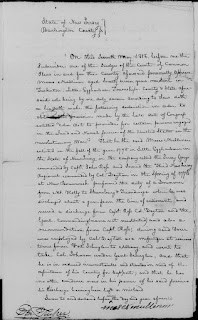 On this Seventh May 1818, before me the
Subscriber one of the Judges of the Court of Ommon
Pleas in and for the County aforesaid personally Appears
Moses Mulliner aged Seventy-seven years resident in
Tuckerton, Little Eggharbour Township, County & State afore-
said who being by me duly sworn according to Law doth
on his Oath make the following declaration in order to
obtain the provision made by the late Act of Congress
entitled "An Act to provide for certain persons engaged
in the Land and Naval service of the United States in the
revolutionary War:"  That he the said Moses Mulliner
enlisted in the fall of the year 1775 in Little Eggharbour in
the State of New jersey in the company called the Jersey Greys
commanded by Capt. John Ross and Joined the Third New Jersey
Regiment commanded by Col. Dayton in the SPring of 1776
at New Brunswick performed the duty of a Drummer
from Mt. Holly to Skeensbury & Ticonderoga where he was
discharged about a year from the time of enlistment and
recved. a discharge from Capt. Ross Col. Dayton and the
Genl. Commanding (name not recollected) and also a
recommendation from Capt. Ross; during said Tour
was employed by Col Dayton as a messenger at various
times from Fort Schuyler to Albany, and went to
take Col. Johnson under Genl Schuyler, and that
he is in reduced circumstances and stands in need of the
assistance of his County for Support; and that he has
no other evidence now in his power of his said Services
his discharge having been lost or mislaid

Sworn to and declared before me the day and year aforesaid 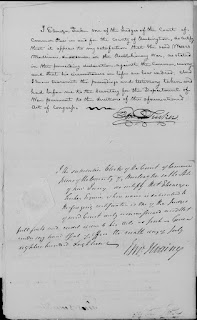 I Ebenezer Tucker one of the Judges of the Court of
Common Pleas in and for the County of Burlington, do certify
that it appears to my satisfaction that the said Moses
Mulliner, did serve in the Revolutionary War, as stated
in the preceding declaration, against the Common enemy;
and that his circumstances in life are low indeed:  And
I now transmit the proceedings and testimony taken and
had before me to the Secretary for the Department of
War pursuant to the directions of the aforementioned
Act of Congress.

I the subscribed Clerk of the Court of Common
pleas of the County of Burlington in the State
of New Jersey do certify that Ebenezer
Tucker Esquire, whose name is subscribed to
the aforegoing certificate is One of the Judges
of said Court duly commissioned and that
full fault["] and credit us due to his Acts as such — Given
under my hand & seal of office the ninth day of July
eighteen hundred eighteen 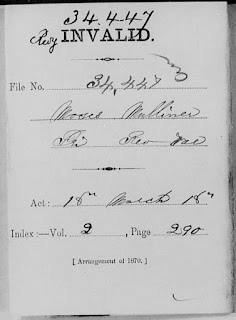 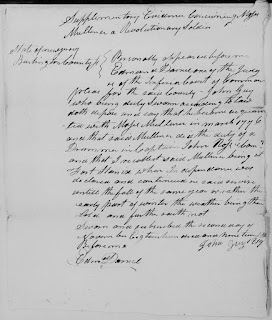 Before me
Edmd Darnel 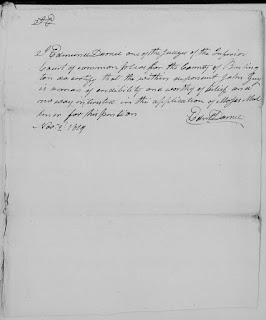 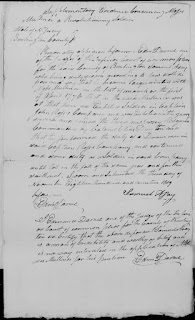 Personally appeared before me Edmd Darnel one
of the Judges of the Inferior Court of Common Pleas
for the said County of Burlington Samuel Ajay
who being duly sworn according to law doth de
pose and say that he became acquainted with
Moses Mulliner in the last of march or the first
of April 1776 that he the said Mulliner was
at that time an Enlisted Soldier in Captain
John Ross's Company and was Enlisted in the year
service was joined the third new Jersey Ridgonent [sic]
Commanded by Colonel Elias Dayton and
that he performed the duty of a Drummer in
said Captain Ross's Company, and continued
and done duty as a Soldier in said Company
until late in the fall of the same year and further
saith not. Sworn and Subscribed the third day of
November Eighteen hundrid [sic] and nineteen 1819

before me
Demd Darnel 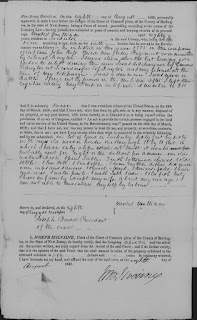 New Jersey District ss.  On this  eighth __  day of August ___  1820, personally
appeared, in open Court before the Judges of the Court of Common pleas, of the County of Burling-
ton, in the State of New Jersey, being a Court of record, proceeding according to the course of the
Common Law—havng jurisdiction unlimited in point of interest, and keeping records of its proceed-
ings.  Moses Mulliner  ___________________________  aged  eighty
years, resident in  Tuckerton  ___________  in the said County, who, being first duly
sworn  according to law, doth, on his  oath _ declare that he serviced in the Revolu-
tionary war as follows :—  he enlisted in the year 1776 in the company
of Captain John Ross , third New jersey Regiment commanded
by Colonel Dayton – I served eleven months but having got a
person to enlist during the war I wa discuarged by General
Schuyler at Ticonderoga  Col Dayton was my Colonel at the
time of my discharge – I was a drummer – I was never in
Battle – I frequently served in the Militia after I left the
regular army  My Pension certificate is number 16.211

And I do solemnly  swear  that I was a resident citizen of the United States, on the 18th
day of March, 1818; and that I have not, since that time, by gift, sale, or in any manner, disposed of
my property, or any part thereof, with intent thereby so to diminish it as to bring myself within the
provisions of an act of Congress, entitled " An act to provide for certain persons engaged in the land
and naval service of the United States, in the Revolutionary war:" passed on the 18th day of March,
1818; and that I have not, nor has any person in trust for me, any property, or securities, contracts,
or debts, due to me; nor have I any income other than what is contained in the schedule following,
and by me subscribed.  one lot of land in Tuckerton sixty feet by sixty
with one old wooden house one story high 15 by 18 feet – in
which I have only a life estate at most it would
probably rent for eight or ten dollars per annum – old old
walnut Desk – 1 pine Table . 3 rush bottomed chairs – 1 old
settee – 1 Iron Pott – 1 Tea Kettle – 1 dozen Earthen dishes . six queen
ware cups and Saucers . 1 Shovel & tongs – 3 Knives & forks – 1 pair
andirons . 1 water pail . 1 wash Tub . 1 axe – 1 old fish Net –
I have no family except my wife about my own age . I
am not able to Maintain Myself by labour ---------------- " -----------------

I, JOSEPH McILVAINE, Clerk of the Court of Common please of the County of Burlin-
ton, in the State of New Jersey, do hereby certify, that the foregoing  deposition  and the sched-
ule thereunder written, are truly copied from the record of the said Court; and I do further certify,
that it is the opinion of the said Court that the total amount in value of the property exhibited in the
aforesaid schedule is  fifty ---- " ------  dollars and ---- " -----  cents.  In testimony whereof,
I have hereunto set my hand, and affixed the seal of the said court, on the  eighth  day of
August  1820. 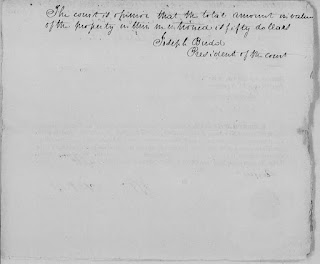 Joseph Budd
President of the court