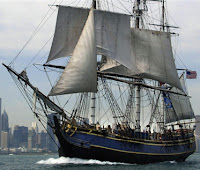 Claudene Christian, a fifth great-granddaughter of Fletcher Christian, who led the famous mutiny against Captain William Bligh on the HMS Bounty in 1789, perished today when the replica Bounty was damaged in Hurricane Sandy.  Claudene was a member of the crew aboard the replica Bounty that was constructed for the 1962 movie Mutiny on the Bounty.  She had always been interested in the ship because of her ancestry and joined the crew in May of this year.

The Bounty left Connecticut last week headed to St. Petersburg, Florida.  It was caught in Hurricane Sandy on Monday afternoon and heavily damaged.  Fourteen of the sixteen crew members were saved by a U.S. Coast Guard rescue team.  Claudene was found unresponsive in the water and passed away in an Elizabeth City, North Carolina hospital this evening.

I knew Claudene from when I was in the USC Marching Band.  She became a song girl (cheerleader) in her freshman year, which was my last year in the band.  My deepest sympathies to her family and to the greater USC family on her passing.
Posted by Janice M. Sellers at 7:27 PM