Treasure Chest Thursday: Another Recommendation for Jean La Forêt's Work as a Teacher 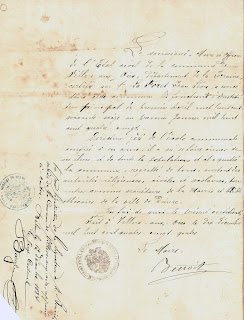 The second document for Jean La Forêt is similar in many ways to the first, which I wrote about last week.  This sheet is larger, 8 1/4" x 10 7/8", and is only one piece of paper.  But it is also spotted and aged, and backed with the same type of material as the first.  The backing has separated from the paper on the right side, and it looks as though the texture might be from threads (there's a loose thread near the top), so it might be some kind of treated fabric?  It is attached to the first sheet by the grommet I described, which is why the bottom left corner is folded under in the scan.  As with the first document, this one is entirely handwritten in French except for two rubber stamped circular seals, both of which have German and French words.

This is the transcription of the document:

And now the translations:

The undersigned, mayor and official of the civil state of the town of Villers-aux-Oies, Department of Lorraine, certifies that Mr. Jean Léon La Foret fulfilled the functions of senior instructor in this town from April 1, 1876 to January 1, 1880.

Enthusiastic director of the town school entrusted to his care, his students and the entire population liked him, and he left the town missed by everyone, above all the religious, civil, and school authorities, for his work as the administrator of the town hall and official library of the city of Dieuze.

In witness whereof the present certificate

Viewed to witness the signature of Mr. Benoit mayor of the town of Villers-aux-Oies, signed below.  Delme December 12, 1884

Like the first letter, this is a recommendation for Jean's time as a teacher.  This position followed very closely his earlier one, which he left October 1, 1875.  Again, everyone loved him and his work (or are these stock phrases used in the 19th century for reference letters in Alsace-Lorraine?).

Villers-aux-Oies was mentioned in the first letter.  I am a little confused about where each school was, however.  The first letter was from the mayor of Salonnes, who wrote about Jean's work at the school in Villers-aux-Oies, but he said "in this town."  This letter was from the mayor of Villers-aux-Oies, apparently writing about Jean's work at a school in the same town.  Are the two men referring to different schools?  I plan to ask a colleague from France if he can clarify this for me.

Germany still controlled Lorraine in 1884, as evidenced by the German in the official seals.  Again, however, we see the small act of defiance:  Mayor Benoit writes that Villers-aux-Oies is in the Department of Lorraine, not Lothringen.

I may watch too much NCIS.  When I saw the mayor's name of Benoit, I immediately thought of Jeanne Benoit.
Posted by Janice M. Sellers at 10:50 PM