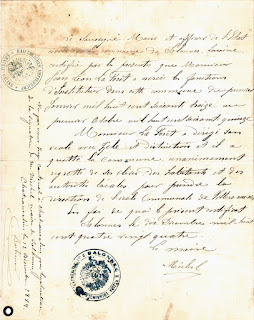 I fully intended to begin posting documents about Jean Le Forêt last week, but it was a long day, and when I realized the first document was in French and I would need to type both the French and the translation, I just wasn't up to it.  I don't want to let myself slack off another week, though, so it's time to start working on Emma Schafer's second husband!

The first document I have for Jean Le Forêt is 7" x 8 7/8".  It seems to be two narrow pieces of paper layered to create a wider sheet.  The paper is quite yellowed and spotted with age.  It is backed with some sort of textured material.  The texture is reminiscent of plastic, but it's unlikely to be that.  I really don't know what it is.  It has a small grommet in the lower left corner which attached it to two additional French documents.  The document is entirely handwritten in French except for two rubber stamped circular seals.  Both seals have German and French words.

And now the translations:

The undersigned mayor and official of the civil state of the town of Salonnes, Lorraine, certifies by these presents that Mr. Jean La Forêt fulfilled the functions of a teacher in this town from January 1, 1873 to October 1, 1875

Mr. La Forêt managed the school with enthusiasm and distinction and left the commune, universally missed by his students, the residents, and the local authorities, to run the town school of Villers-aux-Oies

In witness whereof the present certificate

Viewed by us canton judge in Chateausalins to witness the signature of Mr. Michel, mayor of Salonnes

This is obviously a recommendation letter.  Even though in the United States the only information I have for Jean so far is that he was a laborer or in the military, he apparently was a school teacher and administrator in France from 1873 to 1875.  He seems to have been respected for his work.

The two seals, with their combination of the town name in French but the rest of the information in German, are examples of the effect of Germany having taken control of Alsace-Lorraine after the end of the Franco-Prussian War.  Emma wrote about Lorraine being a French-speaking country but part of Germany, and J. K. Rowling's ancestor, who had been French, became German.

Just because Germany was in control didn't mean everyone had to like it.  Mayor Michel wrote that Salonnes was in Lorraine, not Lothringen.  A small act of defiance, but a point was made.
Posted by Janice M. Sellers at 11:45 PM