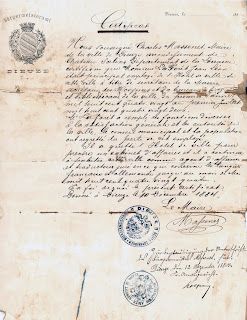 The third document I have relating to Jean La Forêt is another recommendation for him.  It is similar to the first and second recommendations which I have previously written about.  This is the largest, at 8 3/4" x 11".  Like the first letter, this appears to be two pieces of paper layered together down the middle to create a larger sheet.  This looks like letterhead, with the coat of arms of Dieuze in the upper left corner and a date line in the upper right corner.  The page is spotted and aged, as the others are, and is backed with the same type of material.  This backing looks even more like fabric than the others, as the edges are frayed.  The page has two heavily creased folds, and the paper is cracked along the folds.  This sheet has a torn lower left corner and looks as though it was attached to the other two by the grommet but somehow became separated over the past 130 years.  The document is again entirely handwritten, but this time the main letter is in French and the verification of the signature is in German.  Two rubber-stamped circular seals are by the signatures.

Here's the transcription of the document:

Writing at bottom [I apologize for massacring the German]:

And now my translations:

We the undersigned, Charles Massenes, Mayor of the city of Dieuze, precinct of Château Salins Department of Lorraine, certify that Mr. Jean Léon La Forêt was a senior employee of City Hall with the title of administrator of the Town Hall, administrator of the home for the aged and charity office, and city librarian, from January 1, 1880 to July 1, 1882.

Mr. La Forêt fulfilled his diverse responsibilities in a satisfactory manner, and the city leaders, the municipal council, and the public regretted the loss of him as an employee.

He left City Hall to work for a business firm and continued to live in the city as a business agent and a licensed translator in French and German, up to the month of May 1884.

In witness whereof the present certificate.

Writing at bottom (I'm guessing this is similar to the previous items written in French):

To approve the signature of Mayor Massenes, (?).

This is another recommendation letter for Jean, but instead of a teaching position, he was the City Hall administrator (probably a similar position to that of Stéphanie Fischer, whom we saw on the J. K. Rowling episode of Who Do You Think You Are?), in addition to taking care of the home for the aged, the charity office, and the library.  Then he worked as a business agent and a translator.  The second recommendation letter mentioned that Jean was going to work for the Dieuze city and library, so it's nice to see it confirmed.

This time both the mayor and the person verifying his signature were in the same city.  Dieuze was close to the other locations associated with Jean.

With the three letters of recommendation, we now have a timeline of Jean's employment for several years:

According to the information Emma La Forêt mailed to the pension office, Jean was born December 4, 1853, meaning he started working as a teacher when he was 19, which sounds reasonable.  In her application for an emergency passport, Emma wrote that Jean immigrated to the United States about May 1884, which apparently is where he went after leaving Dieuze.  The dates are fitting together nicely.

All three letters of recommendation were written by the various mayors on December 10, 1884 and approved/witnessed on December 12 by the appropriate authorities.  Again according to the information Emma sent when she was trying to get a pension based on Jean's service, he enlisted on August 11, 1884.  I wonder what purpose the recommendations served four months later.  Maybe they helped Jean get a promotion?

Speaking of the mayors, this third man also wrote that he was in Lorraine, not Lothringen.  Fourteen years later, and those Germans still weren't very welcome.

If anyone can help with the German that I've so horribly mangled above, please post a comment with what it should be!  Though I am very proud that I was able to read Unterschrift and Bürgermeister.
Posted by Janice M. Sellers at 1:18 AM